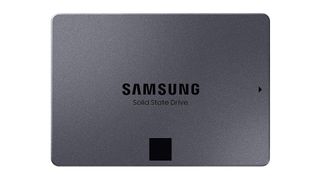 Since those flash-based storage drives first launched, a 100-percent solid state PC has always been the dream. For the longest time it was something reserved for the big spenders. However, now it can be a reality for everyone thanks to large, affordable SSDs like this beefy Samsung 860 QVO 2TB SSD. This deal is available now for just under £189 and will allow for a pretty beefy installed game library without the need to resort to an old school magnetic HDD to save cost.

Of course, at this price you're not getting the very fastest SSD technology out there. As you'll find It's the quad-level (QLC) NAND memory cells in the Samsung 860 QVO SSD that enable increased data density at a far lower cost. Inevitably, they're not quite as quick as the NAND chips in TLC and MLC drives. Still, with reads of 550MB/s and writes of 520MB/s, Samsung's 860 QVO is comparable to most competitive SATA drives out there. Although it's still a far cry from the speedier PCIe SSDs the company produces, such as the 970 Evo Plus, or its latest PCIe 4.0 debut the Samsung 980 Pro, for cheap affordable storage, the QLC at the heart of the 2TB 860 QVO is second only to those sluggish spinning hard drives of yesteryear.

Indeed, thanks to Samsung's clever SSD controller chipset and buffering technology, it won't be often that you even experience the underlying performance of the QVO's QLC NAND. Most of the time, you'll get a typically snappy solid-state experience, enabling you to kiss goodbye to HDDs with moving parts, at least until the DRAM cache fills up which it absolutely won't when gaming or streaming media.

Samsung also backs the QVO with a three-year warranty and up to 1,440TB of writes. So that other concern that comes with QLC memory, namely longevity, needn't be a worry. You can check out more of our favourite SSDs here.