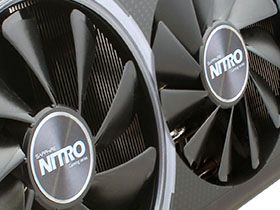 Sapphire’s Nitro+ RX Vega 56 8G is a distinctly high-end implementation. As far as we've seen, it's the best-cooled RX Vega 56 out there. Unfortunately, it’s also difficult to find as the company focuses on its Pulse-series cards. Don’t let that scare you away from Radeon RX Vega 56 altogether, though. With competing models available under $300, Vega 56 is more attractive than ever.

AMD’s Radeon RX Vega 56 was introduced almost two years ago. Back then, it valiantly matched the GeForce GTX 1070’s performance, but also used significantly more power, sold at a notably higher price, and suffered from limited availability. The company had put so much effort into hyping Vega up that a lot of enthusiasts couldn’t help but feel disappointed in the design’s inability to catch Nvidia’s fastest gaming cards, which launched months prior. At the right price, though, we always knew Radeon RX Vega 56 could be a compelling alternative to its competition.

Not long after Nvidia unveiled the GeForce GTX 1660 Ti, we noticed certain Radeon RX Vega 56es falling from $400 down to $300, and in some cases even lower. Although the GeForce is a completely modern card with plenty of redeeming qualities, AMD’s Radeon RX Vega 56 had finally reached a point where it deserved another look.

With Navi around the corner, board partners aren’t keen on sending out the aging Radeon RX Vega 56 for review. We did have a sample of Sapphire’s top-shelf Nitro+ RX Vega 56 8G that never made it to the test bench, though. Before we started running tests, a company representative assured us that the Nitro+ is still shipping in small quantities. However, Sapphire is focusing its efforts on building more $300 Pulse Radeon RX Vega 56 cards.

No doubt, the Nitro+ will be a bit faster than the Pulse. It’ll use more power, run cooler, and make less noise, too. But as you compare the Nitro+ to AMD’s reference Radeon RX Vega 56 through our benchmark suite, imagine Sapphire’s Pulse model somewhere in between. Our intention is to give the Tom’s Hardware audience another look at Vega 56’s performance knowing that $300 (and lower) cards are readily available. Keep this bit of context in mind as we make our way around Sapphire’s biggest and baddest version of Radeon RX Vega 56.

Back when we reviewed AMD’s reference Radeon RX Vega 56, we measured ~223W of power consumption using the main firmware’s Balanced power profile. Sapphire’s Nitro+ RX Vega 56 8G averages ~282W under a similar workload. That’s a 26% increase for slightly better performance. So how does Sapphire keep Vega 10 running stably under those conditions? It starts with a substantially-sized thermal solution.

Sapphire calls its cooler Tri-X for the trio of fans that blows air through dense arrays of aluminum fins. Whereas AMD’s reference Radeon RX Vega 56 weighs 2.35lb. (1,064g), the Nitro+ RX Vega 56 waddles in at 3.28lb (1,490g)—40% more. The PCB is braced by a frame on one side and a metal backplate on the other. Still, Sapphire bundles a support bracket with its card to help prevent motherboard slot damage.

Substantial dimensions contribute to the Nitro+’s imposing presence. For reference, AMD’s Radeon RX Vega 56 is 10.5 inches long, 4.375 inches tall, and a little more than 1.5 inches thick with its backplate in place. It only takes up two expansion slots. Meanwhile, the Nitro+ RX Vega 56 8G is more than 12.25 inches long, 5.125 inches tall, and 2.125 inches wide, taking into account fan blades that stick out beyond the shroud. You’ll naturally need to reserve three expansion slots for a proper fit.

From the front, we see three 6mm heat pipes running through vertically-oriented aluminum fins. That means air blown through Sapphire’s sink is pushed down toward your motherboard and out the top, likely at the side of your case. This isn’t a big deal on a mainstream graphics card, since lower power consumption means there’s less waste heat to dissipate. A thermal solution responsible for cooling almost 300W, however, leaves a lot of warm air to push around. Make sure your chassis is set up for optimal flow.

We do approve of Sapphire’s distribution of two DisplayPort and two HDMI outputs, facilitating the simultaneous use of multi-monitor configurations and VR HMDs. But the company could have even added a fifth or sixth connector, particularly on such a premium piece of hardware. There’s no purpose to a free-flowing grill on the second expansion slot. After all, air doesn’t move through there anyway.

A picture taken above the Nitro+ shows the two outside 92mm fans, which spin counter-clockwise, and the 80mm center fan that turns clockwise. Gigabyte employs a similar scheme to ensure the airflow from each fan is complementary, rather than creating unhelpful turbulence between them. Under the fans, a two-part sink stretches from one end of the PCB to the other. Three 8mm and two 6mm heat pipes connect the pieces. One more 6mm pipe loops around in the fin array sitting over AMD’s Vega 10 GPU. And two flattened 6mm pipes draw heat from the voltage regulation circuitry, dissipating it through a pair of auxiliary sinks.

This is where it’s important to draw a distinction between Sapphire’s standard Nitro+ card and the Limited Edition model. Whereas the latter boasts a vapor chamber to more effectively cool Vega 10, the version we’re reviewing today utilizes a simpler copper base with a small protrusion that sits over AMD’s GPU/HBM2 package. Over the plate, those six heat pipes are flattened for maximum contact and plumbed in through both fin arrays. No other on-board components touch the main sink. Under the heat sink, Sapphire uses a metal frame over its PCB for stability. Thirteen screws hold the frame in place through the backplate, which sandwiches the board and is also metal. For more detail on Sapphire’s board-level components, check out our Nitro+ RX Vega 64 Limited Edition review. That card employs two additional power phases and one more eight-pin auxiliary connector but is otherwise similar.

Around back, the aforementioned plate almost completely covers the PCB’s surface. A few areas are open to ventilation, while others are punched in to contact SMT components (via thermal pads). Black, gray, and white colors cut mechanical-looking lines into the backplate, while LEDs shine through a logo toward the end. Particularly where the metal plate touches electronics on the board, it plays an active role in cooling.

There are more RGB LEDs up top. Sapphire’s logo lights up under the mirrored isosceles trapezoid to match the backplate. At the far left, close to the slot bracket, a vacant four-pin header constitutes one half of Sapphire’s Turbine-X feature, which allows you to plug in a PWM fan and have its rotational speed controlled by PCB-mounted thermal sensors. The other four-pin connector is on the card’s rear edge. Next to Turbine-X header up top, a slide switch selects between one of two firmware versions. Each UEFI exposes three power profiles through AMD’s Radeon Settings: Power Save, Balanced, and Turbo. Between them, that’s six available options. At the board’s other end, a pair of eight-pin auxiliary connectors are more than ample for the Nitro+ RX Vega 56 8G’s sub-300W power consumption.

The Vega 10 processor under the hood of Sapphire’s Nitro+ RX Vega 56 8G is the same GPU found on Vega 64 cards, just trimmed down a bit. It’s still a 486 mm² behemoth sporting 12.5 billion transistors manufactured on GlobalFoundries’ 14LPP platform. It boasts four Shader Engines, each with its own geometry processor.

Instead of 64 active Compute Units across those Shader Engines, though AMD turns off two CUs per Shader Engine, leaving 56 enabled across the GPU. Given 64 Stream processors and four texture units per CU, you get 3584 Stream processors and 224 texture units--~88% of Vega’s NCU resources. This configuration takes another hit to performance in the form of lower base and typical boost clock rates, though we already know that Sapphire mitigates this somewhat with an overclocked core frequency. Based on the company’s specification, FP32 throughput is a theoretical 11.1 TFLOPS. However, our real-world analysis shows its 1,550 MHz boost rate to be unrealistically high.

Each of Vega 10's Shader Engines sports four render back-ends capable of 16 pixels per clock cycle, yielding 64 ROPs. These render back-ends become clients of the L2, as we already know. That L2 is 4MB in size, whereas Fiji included 2MB of L2 capacity (already a doubling of Hawaii’s 1MB L2). Ideally, this means the GPU goes out to HBM2 less often, reducing Vega 10’s reliance on external bandwidth.

Adoption of HBM2 allows AMD to halve the number of memory stacks on its interposer compared to Fiji, cutting an aggregate 4096-bit bus to 2048 bits. And yet, rather than the 4GB ceiling that dogged Radeon R9 Fury X, RX Vega 56 comfortably offers 8GB using 4-hi stacks, like the Vega 64. A 1.6 Gb/s data rate facilitates a 410 GB/s bandwidth figure, exceeding what the GeForce GTX 1660 Ti (or even the GeForce RTX 2060) has available to it using GDDR6. Still, it's a little surprising that AMD carves out ~15% of its throughput budget, given the emphasis on memory all the way back to Hawaii (512-bit aggregate bus) and Fiji (HBM enabling 512 GB/s).

At this point, we have a substantial library of performance results from AMD- and Nvidia-based graphics cards. This allowed us to pick and choose between the models we wanted to compare through our benchmark suite. Of course, that meant calling up on our old graphics workstation once more. The system employs an MSI Z170 Gaming M7 motherboard and Intel Core i7-7700K CPU at 4.2 GHz. Its processor is complemented by G.Skill’s F4-3000C15Q-16GRR memory kit. Crucial’s MX200 SSD is included, joined by a 1.6TB Intel DC P3700 loaded down with games.

Next Page Performance Results: 1920 x 1080
12 Comments Comment from the forums
Be In the Know