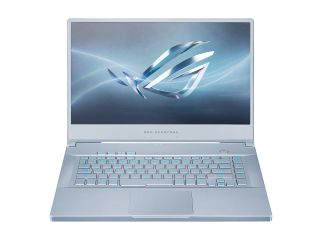 Coming in at 4.2 pounds, the Zephyrus M GU502 sports gaming capabilities on the higher end of what Nvidia’s GTX cards can put out, backed by Intel i7 processing power. It also has 16GB of DDR4 RAM, a 512GB PCIe SSD for storage and a 15.6 inch 240 Hz IPS display with G-Sync, which many of even the best gaming laptops forgo.

Asus ROG Zephyrus M GU502: was $1,699.99, now $1,299.99 @ Newegg
The ROG Zephyrus M GU502 is a thin and light gaming laptop that focuses on a balance between power and portability. Its specs are on the higher end of what GTX laptops can offer, and its IPS display boasting a high 240 Hz refresh rate can bring a competitive edge in multiplayer games. View Deal

A 240 Hz refresh rate is well above what many of the best gaming monitors can put out. Those specs are powerful enough to keep up in the modern gaming climate, especially in competitive games, where high refresh rate displays tend to shine brightest. While Intel mobile processors are due for a refresh later this year, the Zephyrus M GU502 is an impressive showing for a GTX laptop.