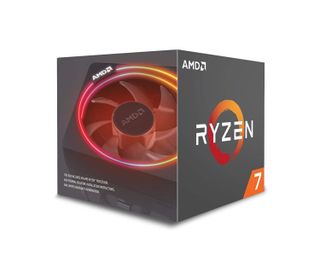 It’s mad to think that when AMD's second gen Ryzen flagship processor launched it retailed for $320, this Black Friday deal makes it half its launch price. That’s just insane. In fact it gets better than that, because you also get a fairly decent RGB Prism CPU cooler with it, and your choice of either Borderlands 3 or Outerworlds.

So really this processor’s costing you about $100, you’re getting a cooler that’s worth $20, and a free game for $40. It’s hard to argue with that kinda price point. By that logic you’re paying $6.25 a thread at best, and if we ignore all the freebies $10 a thread at worst.

Compared to the first generation flagship the Ryzen 7 1800X, the 2700X offers a significant performance increase. In CineBench R15’s single core tests we saw scores of 181, versus 163 for the Ryzen 7 1800X, and in multi-threaded 1907 versus 1775. Admittedly it still loses out against Intel in some gaming scenarios, however honestly the difference is marginal, and if you’re gaming at 1440p or higher, that difference drops off significantly as the bottleneck moves away from the CPU and more towards the GPU. In fact you can check out our full review of the 2700X here, or compare it against the Ryzen 7 3700X here.

Ultimately this is just a staggering deal for an impeccable processor. If your PC ambitions extend beyond the confines of fragging scrubs in Apex Legends at 1080p the Ryzen 7 2700X is a fantastic upgrade. Whether you’re on the X370/X470 platform already, or looking to update an older Intel system, for the price you’ll struggle to find a better Black Friday CPU deal out there.

MORE: How to buy the Right Processor