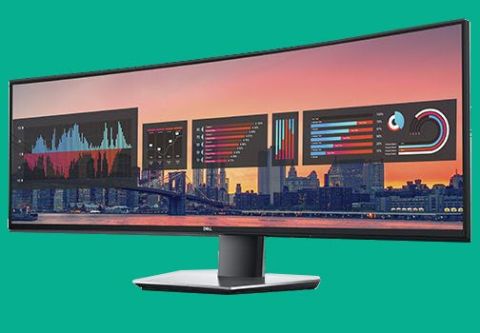 To read about our monitor tests in-depth, check out Display Testing Explained: How We Test Monitors and TVs. We cover Brightness and Contrast testing on page two.

We have only one other 49-inch mega wide monitor to compare with the U4919DW, the Samsung C49HG90. It’s a VA panel with HDR, a 144 Hz response, a 1,080 vertical pixel count, and extended color aimed squarely at gamers. For the rest, we chose ultra-wide panels suitable for business or professional applications. They are the LG 34GK950F, BenQ EX3501R, ViewSonic VP3881 and HP Z38c.

The U4919DW came in a tad under its claimed max brightness of 350 nits, but to be fair, when a panel is this large, it hard to imagine running it at peak brightness. Its immense screen area can light up a small room even at just 200 nits.

With the monitor set to its maximum brightness, black levels were impressively low at just 0.2682 nit. While not quite in VA territory, that’s lower than what most IPS panels are capable of. This results in an excellent max contrast ratio of 1,280.5:1. You’ll see bright bold color and excellent image depth with solid blacks and sparkling highlights.

The U4919DW has a uniformity compensation feature that attempts to eliminate hotspots and dim areas from the screen. Our sample did not need any help here as it was already near-perfect. Activating the feature resulted in a 20 percent drop in brightness and a significant reduction in contrast, mainly due to an increased black level. Though it is a staple in many professional monitors, we don’t consider uniformity compensation to be necessary in a well-engineered panel built with good quality control. This Dell certainly qualifies for that club.

Calibrating to 200 nits brightness with uniformity compensation off cost us almost nothing in contrast, where it finished well ahead of the other IPS screens and wasn’t too far behind the BenQ VA monitor.

Thanks to some of the best uniformity we’ve ever recorded, the U4919DW posted an excellent ANSI contrast score. It’s very close to the static contrast result, which points to a very high-quality panel with a properly installed grid polarizer and no pressure points on the TFT (thin-film transistor) layer, which could have contributed to glow and bleed.

Prev Page Features and Specifications Next Page Grayscale, Gamma and Color
Be In the Know