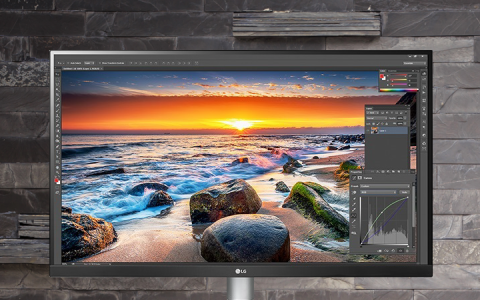 To read about our monitor tests in-depth, please check out Display Testing Explained: How We Test Monitors and TVs. We cover brightness and contrast testing on page two.

Our comparison group is a mix of gaming and professional displays. All but the NEC PA243W offer HDR10 support. We have Dell’s UP2718Q, our current HDR gold standard, BenQ’s EX3501 and EW3270U, both sporting vertical alignment (VA) panels, and ViewSonic’s VP3881 ultra-wide curved screen.

We’re fans of VA panels when it comes to contrast and black levels, but the 27UK850 managed solid performance with its IPS panel. It successfully met the claimed 350-nit spec and scored a respectable 1015.1:1 in the sequential contrast test. When contemplating HDR performance though, it’s hard to ignore the advantage of VA panels. The EW3270U has nearly three times the dynamic range of the best IPS screen here, which is adequate performance for professional and gaming use.

Setting the backlight to zero produced a usable 44 nits of output. This will work fine in dark environments, like post-production editing bays or photo studios. To hit our preferred 50-nit level, we raised brightness three clicks. Black levels and contrast remained consistent at all output levels, which is what we’d expect from any monitor, regardless of category or price.

Calibrating the 27UK850’s custom mode reduced contrast slightly to 943.6:1. That’s because we lowered the contrast slider to fix a gamma error. It also took care of the white point at 100% brightness which, without adjustment, looked too blue. The difference in actual content was small but noticeable. Getting grayscale right offered benefits that outweighed the dynamic range loss. The image was far more three-dimensional, and whites were easier on the eyes. This, coupled with our 200-nit peak setting, ensured fatigue-free viewing for long work or gaming sessions and the sharpest rendering of fine detail.

Though the 27UK850’s contrast levels were about the same in HDR mode, entering HDR mode brought out image highlights with a peak white level over 420 nits. This likely qualifies the monitor for VESA’s HDR400 certification, although LG hasn’t made that claim yet. Interestingly, the 27UK850 achieved this with a full-field white pattern. And when measuring a 10% window, output was lower. This clearly demonstrates the use of dynamic contrast, which is a must for any HDR-capable LCD panel. Like in other edge-backlit displays, the extra punch of HDR was subtle but visible.

The 27UK850 managed to squeak past the NEC PA243W in our intra-image contrast test. Even though the LG monitor is value-priced, it uses a quality panel with consistent uniformity and good quality control. This bodes well for its HDR performance as well. There is no such thing as too much contrast, and LCD technology needs all the help it can get. (We may all have OLED panels on our desktops someday. But today is not that day.)

Prev Page OSD Setup & Calibration Next Page Grayscale, Gamma & Color
1 Comment Comment from the forums
Be In the Know