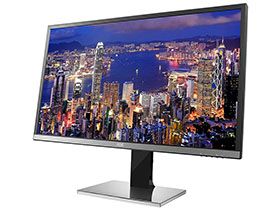 For professionals seeking a DCI-P3 mastering monitor, you won’t find better than the AOC U3277PWQU unless you spend a whole lot more money. For a surprisingly low price, you get factory-certified, 10-bit color in a 32-inch MVA screen with Ultra HD resolution and a beautiful, clear picture. Despite a lack of flexibility in the sRGB mode, this display offers high performance and a lot of value. Whether you’re in the business or just want a great display to mate with that new Ultra HD Blu-ray player, this monitor is definitely worth checking out.

Given the confusing marketing that surrounds video displays today, it’s easy to be misled into thinking that Ultra HD is only about resolution. In fact, the standard includes specifications for color gamut that extend beyond what is currently possible in consumer displays. That gamut is better known as Rec.2020.

We’ll eventually see monitors reproducing that enormous gamut, but today, the best we can hope for is Adobe RGB or DCI-P3. The latter is of particular interest because it’s what Hollywood uses in its latest films, both at the cinema and on UHD Blu-ray. Most premium televisions can reproduce DCI but it is less common on the computer desktop. Even screens with a native Adobe RGB gamut don’t always render it correctly.

Today we’re testing the second native DCI-P3 monitor to arrive in the lab, AOC’s U3277PWQU. It’s a 32” MVA panel with 10-bit color, 3840x2160 resolution, and a factory-certified calibration. Which was the first such screen? AOC’s C4008VU8 40” curved monitor, of course. But this one promises a bit more. Let’s take a look.

In the chart above, black represents Rec.2020, white is Rec.709 (aka sRGB), and red is DCI-P3. DCI-P3 significantly more saturated, especially in the red and green primaries. If you go to a digital cinema, or you play an Ultra HD Blu-ray disc on a Vizio P-series, or other premium television, you’ll see content displayed in the larger gamut. All UHD Blu-rays are mastered using this standard.

Many wide gamut computer monitors can reproduce it but don’t always include the option in their OSDs. It’s more typical to see only sRGB or Adobe RGB available. We’ve encountered a few screens that advertise DCI-P3 but have yet to measure one that truly hits the mark, until now.

The U3277PWQU nails the DCI color points perfectly right out of the box. It even includes a calibration data sheet, but surprisingly, the certification only covers the sRGB standard, which it also meets accurately. Nonetheless, if you need a DCI-capable display for your post-production hardware suite, this monitor is qualified.

Its ambitions are furthered by the inclusion of a flicker-free backlight and 10-bit color, which is achieved without the use of framerate conversion (FRC). Unlike the majority of professional screens that employ IPS panels, this one goes for higher contrast with an MVA part from Innolux. That means content editors will be able to see their material reproduced on a screen more like what a consumer sees when viewing a premium television. By wrapping these capabilities in a sturdy chassis, AOC is offering a professional-grade tool at the surprisingly low price of $500 at this writing.

The double-corrugated cardboard carton is more than up to the task of protecting the large and heavy monitor. Blocks of rigid foam protect the panel, upright, and base, which must be assembled before use. You’ll need a Philips-head screwdriver to mate the upright with the 100mm VESA mount. The base is attached with a captive bolt.

Bundled cables include DisplayPort, USB 3.0, and an analog audio connector. An IEC power cord feeds the internal power supply. In addition to the calibration data sheet, you’ll find a quick start guide. Additional documentation must be downloaded from AOC’s website.

The U3277PWQU has many surfaces finished in high-gloss plastic or brushed metal. They are protected during shipping by acres of plastic wrap. We removed a ton of the stuff, and it took quite a while to find it all. The base is all metal with a texture that’s both brushed and polished. It looks great but attracts fingerprints like crazy. The piano black trim around the panel is the same way. We suggest wiping everything down with a clean cloth after installation.

The anti-glare layer is designed for clarity first with good-but-not-great reflection control. We expect most of these monitors to be installed in light-controlled rooms, but if you have a more typical office, take care with placement to avoid washing out the superb image. The bezel is 19mm wide at the top, 20mm at the sides, and 25mm across the bottom. Control buttons are found underneath at the bottom-right and are marked with tiny, nearly-invisible icons. Luckily, they are easy to operate by feel and they respond with a satisfying click.

The beefy stand offers a full portrait mode along with 30° back tilt, almost 360° swivel, and just over 5” of height adjustment. Movements are firm and solid with a feel that matches that of the best built monitors we’ve reviewed. The U3277PWQU is a cut above AOC’s normal standard, which is already fairly high.

The USB hub is found around the right side and includes a version 3.0 upstream port along with two downstream ones. The second pair of jacks support version 2.0. The profile is of average thickness and nicely squared off for those who prefer to wall mount their panel using the 100mm VESA lugs. Ventilation is generous and extends all around the component bulge. The top grill houses two larger-than-average speakers of 3W apiece. They play to a healthy volume without excessive distortion, although their frequency range is limited to the high mid-range.

The input panel is typical AOC with one of everything. You get HDMI 2.0 with HDCP 2.2, DisplayPort 1.2, DVI, and VGA. Audio is supported with a headphone jack and a line-level input, both 3.5mm.