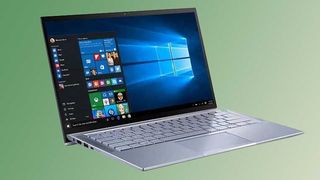 We've seen some great laptop sales during this holiday tech deals season, but this one is so good, I ordered one for my wife just before writing this. Newegg (via its eBay store) now has a ZenBook 14 with a Core i7-8565U CPU, 16GB of RAM, a 512GB SSD and Nvidia MX150 graphics for just $799.

This is a ridiculously thin-and-light laptop, considering its specs. It weighs just 3.2 pounds and measures a mere 0.65 inches thick yet it finds room for two, full-size USB Type-A ports, a USB Type-C connection, HDMI out and a card reader.

The ZenBook 14 UX431FN-IH74 has a 1920 x 1080 screen that's specked to hit 100% of the sRGB gamut and has tiny bezels all around. While some prosumers might want a higher-resolution screen, keeping it to 1080p allows the laptop to offer a rated 10 hours of battery life.

I bought the ZenBook 14 UX431FN-IH74 for my wife, because she runs a crafting business and needs something that's thin and light enough to carry around, but powerful enough to run her design software. While not great for gaming, the MX150 GPU will help a lot with Photoshop and other graphics apps.

The ZenBook 14 also boasts Harmon Kardan speakers and a touchpad that converts into a numpad on demand. Asus says that the ZenBook 14 has been designed to pass MIL-STD durability tests for drops and extreme temperatures.