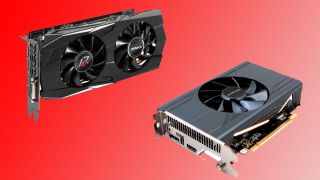 If you're building a budget gaming PC, particularly in a smaller chassis, a Radeon RX 570-powered graphics card could be your best choice right now. Though this entry-level chip is long in the tooth, having launched in 2017, it is more than adequate for playing PC games at 1080p resolution at reasonable settings.

As part of the holiday tech deals madness, Newegg has a couple of RX 570 cards at really low prices. If you're building a regular-size system without serious space constraints, you can grab ASRock's Phantom Gaming RX 570 for just $109. If you're building in a mini ITX chassis and need a really-short card, pick up the Sapphire Pulse RX 570 ITX card for $115 (coupon code VGAPCJP586). Both cards come with some free software in the form of Xbox Game Pass and either Borderlands 3 or Ghost Recon Breakpoint.

The Phantom Gaming D RX 570 comes with 4GB of GDDR5 RAM and a boost speed of 1,293 MHz. There's also a silent mode which tops out at 1,194 MHz.  The Sapphire Pulse RX 570 Mini ITX card has the same amount of RAM and a boost clock of 1,244 MHz. Since we haven't tested the mini ITX card, we can't say for certain how long it is able to maintain that speed, but considering the smaller size and single-fan, it likely can't sustain speeds as well as the larger card.

Either RX 570 card is more than adequate for full HD gaming and can even hit reasonable frame rates on 2K games. For example, in our tests, an RX 570 card achieved an average frame rate of 46 fps when playing Witcher 3 at Ultra settings and 2560 x 1440 resolution. That's pretty awesome for a card that costs less than $120.

If you're looking for a more expensive GPU or one with a more modern processor, check out our list of the best holiday deals.