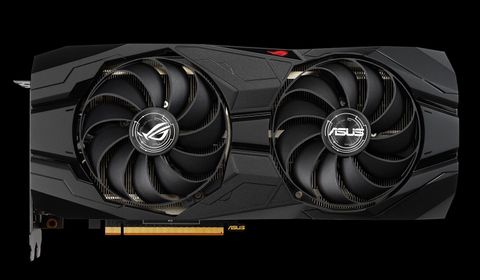 The Asus ROG Strix RX 5500 XT O8G Gaming averaged over 60 fps at 1080p ultra and 1440p medium settings. Priced a bit higher than other RX 5500 XTs, the premium features and superior cooling make this a viable option at the $230 price point.

AMD's Radeon RX 5500 XT launched in December 2019, using the Navi 14 GPU and targeting the budget and 1080p end of the gaming graphics card segment. The card was received well overall, and the RX 5500 XT 8GB variants mitigate any VRAM concerns. The Asus ROG Strix RX 5500 XT O8G Gaming puts its own spin on the GPU, adding a factory overclock along with large heatsink and dual fans designed to keep the card running cool and quiet.

Performance of the Strix RX 5500 XT O8G Gaming landed where we expected. It's faster than the GeForce GTX 1650 Super, slower than the GeForce GTX 1660 and competes with its 8GB peers. When running our test suite at 1080p and ultra settings, the card averaged over 71 frames per second (fps), though a couple games (Metro Exodus and The Division 2) fell under the 60 fps threshold. Reducing settings to medium and running 1080p allowed all titles to average above 60 fps, increasing the overall average to 102 fps. Overall, the Asus ROG Strix RX 5500 XT O8G Gaming — and the RX 5500 XT series in general — is a competent 1080p ultra card.

Let's take a closer look at the Asus card and dig into the details on how it performed against competing video cards. We'll also see just how well the large cooler works on such a low powered card. (Spoiler alert: it barely gets warm.)

The 8GB of GDDR6 memory sits on a 128-bit bus and runs at 1,750 MHz (14 Gbps), which is standard for the RX 5500 XT. This configuration yields 224 GB/s bandwidth. The RX 5500 XT comes in 4GB and 8GB variants, and unless you plan to game at 1080p using reduced settings, you’ll want to get the 8GB over the 4GB cards. With VRAM needs increasing as time goes on, 4GB is now considered a minimum for most users, and we strongly recommend getting 6-8GB for any graphics card purchase going forward.

AMD’s RX 5500 XT’s Total Board Power (TBP) is listed at 130W and recommends a 450W power supply. Asus, like most board partners, do not list the TBP for ROG Strix O8G Gaming but sticks with the 450W recommendation. Actual power use will vary between partner cards due to higher clock speeds, temperatures and where the power limit is set. Feeding power to the card is a single 8-pin PCIe connector capable of delivering more power than this card will need, including any overclocking.

Additional specifications for each of the 5500 XT cards are listed in the chart below.

The Asus ROG Strix RX 5500 XT O8G Gaming is a factory tweaked 2.9-slot video card measuring 11 x 5 x 2.3 inches (280 x 127 x 58mm). Unlike other RX 5500 XT’s we’ve looked at, the ROG Strix is a full-size card both lengthwise and width due to the large PCB and heatsink. The large size means it likely won't fit in many small form factor (SFF) systems, so be sure your case can accommodate the card before buying it.

Asus’ cooling solution on the ROG Strix 5500 XT O8G is robust (ie, overkill) for the paltry 130W it needs to dissipate. The heatsink runs the full length of the card and has five heatpipes that start out over the GPU contact plate and weave their way through the fin array. All critical parts, including the VRAM and VRMs, are directly cooled by the heatsink via plates and thermal pads. The backplate is used for protection and rigidity, doubling as a passive heatsink for the memory.

The plastic shroud covers the large heatsink and gives users one RGB concession, a small Asus ROG symbol located on top of the card. The tastefully implemented solution offers saturated colors but will not dominate the inside of your case, unlike the card itself.

A unique feature on this Asus card is FanConnect II. As the name implies, there's a 4-pin fan header at the end of the board that can be connected to both PWM and DC controlled fans. Any connected fan reacts to GPU and CPU temperatures, and can be set to automatic or manual speeds. This is a good value add for those who may want to hook fans up to the video card instead of the motherboard, though I don’t see many using this so long as there are usually free headers on the motherboard. If you're worried about GPU temperatures, tying fan speeds to the GPU might make sense, but the RX 5500 XT doesn't warrant the extra cooling—especially not on the large Asus O8G model.

The ROG Strix RX 5500 XT O8G Gaming sends power to the GPU and memory through a 6+1 phase VRM.  Power delivery is managed by a single International Rectifier IR35217 multi-phase buck controller. Feeding power to the VRM is a single 8-pin PCIe connector. This configuration allows up to 225W of power (75W from the slot, 150W from the PCIe connector), which is ample power for stock and overclocked use.

Video outputs on this Asus card are typical of modern graphics cards, consisting of a single HDMI (2.0b) output and three DisplayPort (1.4) connectors. Anyone still hanging on to an older DVI-D monitor will probably want to look elsewhere, though adapters are available. We prefer DisplayPort connection these days, though, and appreciate having three such ports.

The motherboard is running BIOS version 7B12v16. Optimized defaults were used to set up the system. We then enabled the memory's XMP profile to get the memory running at the rated 3200 MHz CL16 specification. No other BIOS changes or performance enhancements were enabled. The latest version of Windows 10 (1909) is used and is fully updated as of February 2020.

Our GPU hierarchy provides a complete overview of graphics cards and how the various models stack up against each other. For these individual third-party card reviews, we include GPUs that compete with and are close in performance to the card being reviewed. On the AMD side, we have the Sapphire Pulse RX 5500 XT, ASRock RX 5500 XT Phantom Gaming D 8G OC and the Gigabyte RX 5500 XT Gaming OC. Nvidia cards include the Zotac GTX 1650 Super and the Zotac GTX 1660 Amp.

Our list of test games is currently Battlefield V, Borderlands 3, The Division 2, Far Cry 5, Final Fantasy XIV: Shadowbringers, Forza Horizon 4, Gears of War 5, Metro Exodus, Shadow of the Tomb Raider and Strange Brigade. These titles represent a broad spectrum of genres and APIs, which gives us a good idea of the performance differences between the cards. We're using driver build 441.20 for the Nvidia cards and Adrenalin 2020 Edition 19.12.2 for AMD cards, although the 5600 XT was tested using 20.1.2 beta drivers.

We capture our frames per second (fps) and frame time information by running OCAT during our benchmarks. For clock and fan speed, temperature and power, we use GPU-Z's logging capabilities. We'll be resuming our use of the Powenetics-based system from previous reviews in the near future.

Next Page Performance Results: 1920 x 1080 (Ultra)
12 Comments Comment from the forums
Be In the Know