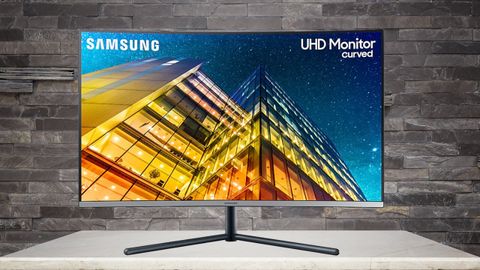 The Samsung UR59C leaves out a few features to achieve its budget 4K price. But it makes up for that with stunning image quality and solid gameplay when driven by a fast graphics card.

Update November 26, 2019: The Samsung UR59C is currently one of our Best 4K Gaming Monitors for those seeking a curved display. It recently got a price drop from $500 and is currently selling for around $450.

Just five years ago Sharp launched one of the first UHD/4K monitors, the 32-inch PN-K321 at the lofty price of $3,000. It wasn’t long before cheaper alternatives appeared, but they relied on 28-inch TN panels to keep prices closer to $600.

The refresh rate unfortunately maxes out at 60 Hz, and there is no adaptive sync, (like FreeSync or G-Sync). That’s a bit of a bummer for gamers, but to be fair, Samsung doesn’t market the UR59C as a gaming monitor. To its credit, it has a snappy 4ms response time, and our tests showed it to have lower input lag than most other 60 Hz UHD monitors we’ve tested.

The base and upright must be assembled with a captive bolt, then the panel is attached using a Phillips-head screwdriver. The power supply is external, but rather than the usual brick, you get a large wall-wart, which is narrow enough not to impede other plugs on a power strip. The only other cable is an HDMI. There are no USB ports, hence, no  more cables.

The UR59C is simple and understated while being distinctly Samsung. Its 1500mm curve radius sounds tight on paper, but since it’s not an ultra-wide, the curve seems less extreme in person. There's no image distortion, and the curve is quite natural, bringing in the sides of the screen in a natural way and just enough to keep the entire desktop within your peripheral vision if sitting about 3 feet away.

The picture is crystal clear, thanks to an excellent anti-glare layer keeping reflections out of the way. A thin bezel surrounds the top and sides with a wider band across the bottom. Control is accomplished by a joystick found around the back-right side. It toggles the power and navigates the on-screen display (OSD) easily and intuitively.

Some of the savings seem to come from the stand, which is a minimalist affair. While extremely solid, it’s also very light and spindly. With no vertical or swivel movements, the only adjustments are 17 degrees back tilt and 2 degrees forward. The stand’s fulcrum is down low, so tilting the panel moves the top away from you.There is no VESA mount, meaning you’re stuck with the factory stand.

The side profile is about as thin as a curved monitor can get. Around back, you’ll find a textured plastic surface unbroken by angles or vent holes. Heat is a non-factor; you can expect cool running from the UR59C.

The input panel is hidden under the circular snap-on cover, and you can fish the cables down the hollow upright for a super-clean look. The photo shows a Mini DisplayPort input, but our sample came with a standard-size port, version 1.2. HDMI is version 2.0, so it works at the monitor’s full native resolution. There are no built-in speakers, but there is a headphone jack, plus volume control in the OSD.

To call up the OSD, press the joystick, click up and press again. You can also adjust picture-in-picture (PIP) and source without going into the full menu. The feature set is appropriate for a monitor of this type with a three-level overdrive, game mode and all the necessary controls for calibration.

Samsung calls its picture modes Magic Bright, and the UR59C has four. Custom is the default setting and the best starting point for calibration. Yes, you will want to make some adjustments because at the factory settings we saw some loss of detail in the image’s darkest and brightest areas. Color looked good out of the box, but a high-contrast VA panel can deliver lots of detail and dynamic range when properly set up.

If you prefer to use a low blue light mode to help reduce eye fatigue, that setting, dubbed Eye Saver, is available in the second half of the Picture menu. It warms the color temp and reduces brightness.

There is also a Game Mode, which alters color to help sharpen the picture. It works as promised, but afterward some colors looked unnatural. Instead, we recommend dialing in a few changes to the RGB sliders, gamma presets and HDMI black level. We’ll show you which ones below.

There is also a Game Mode, which alters color to help sharpen the picture. It works as promised, but made some colors looked unnatural. Instead, we recommend dialing in a few changes to the RGB sliders, gamma presets and HDMI black level. We’ll show you which ones below.

If you want to view two sources at once, you can choose between PIP and picture-by-picture (PBP). Contrast is independently adjustable in the two windows, and you can pick which one sends the headphone jack audio.

The biggest issue we noticed when powering up the UR59C was its gamma curve. Initial measurements showed it to be skewed such that fine highlight and shadow detail were hard to see.

At minimum, we suggest changing HDMI Black Level to Normal and selecting the Gamma Mode 2 preset. If you want to take it further, try our RGB settings below. Once dialed in, this monitor is extremely accurate--as in professional-grade--in all metrics.

Here are the values we used during testing:

Many users have asked why curved 16:9 monitors exist. Based on past observations, we’ve asked the same. They don’t offer enough curve to really create a wraparound effect, at least not in the way an ultra-wide screen does. But the UR59C manages to pull off something new. Thanks to its 1500R radius, the curve makes a visible difference and provides significant benefits.

A 32-inch monitor is big, no doubt, and at typical desktop viewing distances, a flat panel has users placing their windows in the center with less-important elements relegated to the sides. I’m writing this article on a flat 32-inch screen, and though I have several windows open, only the center one (Microsoft Word) is able to win my attention. When I try the same thing on the UR59C, I can leave message windows open to the sides, and their content remains on my visual radar. It’s a subtle effect but a palpable one nonetheless.

The UR59C’s clarity is first-rate, due to high pixel density and high contrast. The benefits of wide dynamic range cannot be understated--everything looks better. Color is bolder, photos and videos are clearer and black text on a white background is easier to read. If color accuracy is a priority for you, this monitor won’t disappoint. Image fidelity is among the best we’ve seen.

We approached gaming with some skepticism. After playing on so many high-speed FreeSync and G-Sync monitors, we wondered how it would be going back to a plain ol’ 60 Hz screen. With a PC using an Nvidia GeForce GTX 1080 Ti FE graphics card, the experience exceeded expectations. In Tomb Raider, we found the best result by setting V-Sync to its triple buffer mode. There was no discernable input lag, and screen tears were eliminated. Turning it off produced the expected tears, though a constant 60 frames per second (fps) rate kept the action from bogging down or stuttering. The UR59C’s overdrive worked well on its fastest setting. It kept motion blur to a minimum, and we never saw any ghosting or object trails.

The Samsung’s high contrast made Call of Duty: WWII a real pleasure. Cut scenes looked like a live-action movie, no doubt because of the 4K resolution and superb color. Though we are fans of speedy, low resolution monitors like the Gigabyte Aorus KD25F (240 Hz, 1080p resolution), there’s something to be said about high pixel density and contrast. Like our Windows experience, everything in the game just looked better. Trees and grass were more realistic, rocks were rockier, dirt was dirtier and reflections from shiny objects really created a sense of depth. No IPS or TN screen can duplicate this kind of image quality and realism.

It’s hard to admit it, but we didn’t miss adaptive sync. The takeaway from that is if your video card is fast enough, it’s not absolutely necessary. Since our framerates stayed solidly at 60 fps, the UR59C’s quick response made input lag and blur a non-issue. Though not strictly a gaming monitor, we think most players will be satisfied with the experience it delivers.

Next Page Brightness and Contrast
6 Comments Comment from the forums