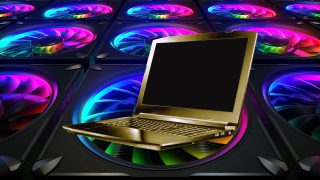 Thankfully, there are  more gaming laptop options now than ever, from budget-friendly to VR-ready. Some come with full-size Nvidia GeForce GTX or RTX graphics cards, while others go for the more efficient Max-Q designs that enable thinner chassis and (sometimes) quieter fans. While many of the best gaming laptops come with a 1080p display and high refresh rates, some include 4K screens.

One of the newest innovations we've seen is AMD SmartShift, which shares power between the CPU and the GPU based on need. We saw this in the Dell G5 15 SE, but it won't be in other laptops until 2021.

To help you find the best gaming laptop today, we've compiled a list of the best models we've tested and reviewed recently. For much more on how to narrow down your list of best gaming laptop considerations, check out our best gaming laptop buyer’s guide. But here are a few quick tips to get you started down the road to the right portable gaming rig for you.

While many gamers may go to desktops to get the most performance for their money, try lugging a tower, monitor and keyboard around in your backpack. When you need a powerful rig you can take with you, there's no substitute for a gaming laptop.

For those looking for something slim and attractive, our pick is the Asus ROG Zephyrus G14. As far as gaming laptops go, the Zephyrus is unassuming in either white or gray with minimalist stylings. But with the AMD Ryzen 4900HS and Nvidia GeForce RTX 2060 Max-Q in our review unit, you get strong productivity and gaming performance. It’s not the best performer on the market in terms of graphics, but it’s the best value for most people.

The battery life is also surprisingly long for a gaming notebook and the keyboard is clicky and comfortable. The fan, however, sometimes goes off even when just sitting on the desktop, and this system doesn’t come equipped with a built-in webcam.

The Alienware m17 R3 can get expensive, especially the way we reviewed it with a 10th Gen Intel Core i9 and RTX 2080 Super. But it also has a fantastic, colorful 17-inch display, perfect for those who want the biggest screen they can get on a gaming notebook. The 4K 60 Hz HDR option is bright and colorful, but if you prefer, there’s also an option for 1920 x 1080 at 144 Hz.

The power we got out of the top tier components was tremendous, with amazing performance across our gaming suite. It also did quite well on our productivity benchmarks, should you want to use this as a workhorse as well.

The m17 R3 has a comfortable RGB keyboard and, for a gaming notebook, isn’t all that thick at 0.9 inches. But these components do suck battery power, so be sure to bring the charger.

The Dell G3 15 is the best gaming laptop for those on a tight budget. It feels solid, the price is right and it will play most games reasonably well. It even looks good. The display is bland, which is a shame, but battery life and keyboard is better than most similarly priced competition.

That makes the Dell a solid choice for anyone who can get over the display as a sacrifice for an otherwise strong machine. Heck, for those times when you don’t need to game on the go, you could plug it into a good budget monitor and get a bigger, prettier screen for your games and media playback at home. If you’re looking to get a machine starting under $1,000, it's an excellent choice.

The Alienware Area-51m, with its desktop-class Core i9-9900K and Nvidia GeForce RTX 2080, is the best gaming laptop for those with a big gaming budget. It offers laptop performance so strong that it will appeal to power users more used to desktops. That's assuming you can afford it without taking out a second mortgage.

It’s awesome that you can upgrade nearly all aspects of the Area-51m, and I hope more desktop replacements go this route. But Alienware still has to release details about how new GPUs will be sold or if and when that replacement program will come to fruition. Then of course there’s the question of how future graphics modules will be priced compared to their standard desktop-card counterparts.

The process to make major upgrades yourself requires some tools and patience, but the ability to replace the CPU, GPU, RAM and storage is truly impressive.

You can also see our complete teardown of the machine.

To play esports titles like the pros, you need a laptop with the fastest screen you can get. The Asus ROG Strix Scar 17 ($2,199.99 to start, $3,299.99 as tested) is a bit pricey because it pairs a 300 Hz display with the top-end parts needed to play games at frame rates that can take advantage of it. But in our testing, that meant smooth animations so you never miss a frame.

Sure, it’s a bit thicker than some competitors like the Alienware m17 R3, but it also managed to outperform them.

If you’re using this laptop to stream your games, though, you’ll most certainly want to also buy a webcam, because the Strix doesn’t have one built in.

It’s admittedly expensive with a starting price of $2,999 (and $3,699 as tested), but Asus’ dual-screen ROG Zephyrus Duo 15 gaming laptop adds a handy, eye-catching second screen while improving cooling and keeping fan noise down in the process. If it weren’t for the awkward input devices and the lack of a webcam, this would be a near-perfect portable gamer.

There are single-screen laptops that will deliver similar performance for less, with better input devices as well. But if you like the idea of a portable with a second screen for Discord chats and YouTube hints as you make your way through the latest AAA title, the Zephyrus Duo 15 is easily the best option we’ve seen yet. Rather than just slapping on another screen, Asus used the space available below its ScreenPad to improve cooling considerably, for more reliable frame rates and quieter operation.

MORE: How to Buy a Gaming Laptop