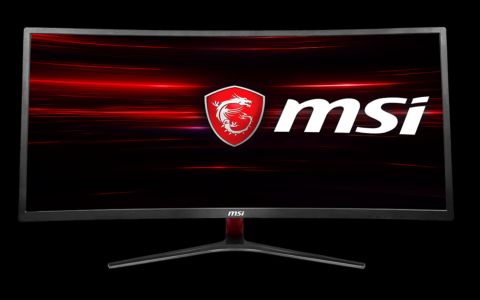 The MSI Optix MAG341CQ doesn’t have it all, but it delivers the things gamers need most–solid video processing, good contrast, high resolution and fast response. Despite a few color accuracy issues, it offers solid performance for a low price.

In a few short years, curved ultra-wide monitors have become a fixture in gaming. What started out as an answer to a question no one asked quickly turned into a must-have. With their 21:9-aspect screens, they heighten the sense of immersion and pull players into a gaming environment in a way no 16:9 monitor can.

The one sticking point for potential buyers is their cost, which is likely $200 more than a 16:9 display with similar features. But relief is in sight with the MSI Optix MAG341CQ. For $480 at the time of writing  (£380), you get 3440x1440 resolution with 8-bit color, a wide gamut, FreeSync and a 100Hz refresh rate. It’s a great way to dip your toe into the ultra-wide waters without spending a fortune.

The MAG341CQ offers nearly everything a gamer might need but does omit a few items in pursuit of value. The stand is fixed and only allows a tilt adjustment. There is no sRGB option. The refresh rate is a 100Hz despite many of the latest ultra-wides support 120 and 144Hz. There’s FreeSync, but since its operating range is 48-100Hz, there is no low framerate compensation (LFC), which might be an issue for owners of older video cards. There’s also no blur reduction and few image modes.

But you do get a nice VA panel with roughly double the contrast of an IPS or TN screen. Plus, you get a 100Hz refresh rate without overclocking, and the 109ppi pixel density is suitable for any task and allows Windows to run at 100 percent dpi scaling. That means text will be at its sharpest and graphic detail at its finest.

Assembly of the base, upright and panel requires a Phillips-head screwdriver. The base’s captive bolt doesn’t have one of those little handles on it, which is a minor annoyance. The panel locks in place with two provided bolts. They are then covered by a small bit of plastic. The power supply is internal, unusual for an ultra-wide, so you get an IEC cord. Video is supported by HDMI and DisplayPort cables. The user manual comes in printed (another rarity).

The MAG341CQ has more understated styling than most gaming monitors. Rather than molded features or lighting effects, it announces its intentions with a red upright and nothing else. This makes it more versatile, and since it also serves well as a workday display, the lack of look-at-me aesthetics is a plus. The curve is relatively tight at 1800R, which is the point where the image wraps around nicely but doesn’t distort. You can sit a comfortable 30-40 inches away and have your peripheral vision filled with sharp picture free of pixelation, thanks to the 109ppi pixel density.

The bezels don’t pretend to be slim; they’re a solid half-inch with a wider strip across the bottom. A tiny blue dot that’s barely visible, even in the dark, represents the power LED. On-screen display (OSD) controls consist of small buttons on the bottom right that are fairly hard to click. In fact, their small size and strong resistance caused me a bit of irritation during the calibration process. They are, at least, precise.

The back of the panel is completely smooth, broken only by a polished MSI logo. Interestingly, the dragon shield shown in the photo is not present on our sample. Even the box art shows the graphic, but we didn’t get one. Perforations on the top and bottom edges provide ventilation. The internal power supply takes quite a few minutes to warm up, during which time the panel clicks softly. Once up to temperature, the noise goes away.

Two features that wound up on the cutting-room floor are speakers and USB ports. You get neither with the MAG341CQ, nor is there a headphone jack. Inputs include one each of DisplayPort 1.2 and HDMI 2.0. You also get a DVI port, which is increasingly hard to find these days as that interface is rapidly disappearing from graphics cards.

The stand is super-solid but only includes 15-degrees backwards and 5-degrees forward tilts and no swivel or height adjustment. The upside is that the assembly is almost monolithic. This monitor will not wobble at all.

The OSD is styled for gaming with an info dashboard up top that shows input resolution, refresh rate, picture mode, FreeSync status and current input. There are five picture modes. User is the default and also allows white point and gamma adjustments. Sadly, there is no sRGB option. The MAG341CQ is an sRGB+ screen, which means its color primaries fall somewhere between sRGB and DCI-P3 (we’ll get into the details of its color-rendering on page three).

Navigating the OSD is a chore, thanks to the aforementioned stiff and tiny buttons. We’d have loved a joystick or at least buttons that don’t hurt to press. Like most monitors, once set up, you won’t have to visit the menu often. The Eye Saver mode offers low blue light, which MSI calls “Less Blue Light.” Like every display with that feature, it warms up the color temp to make reading easier on the eyes. Note, you won’t want to use it for gaming as it will flatten the image considerably.

Gaming features include a FreeSync toggle, 12 different aiming points for first-person shooter newbies and an overdrive setting that is either on or off and offers adequate blur reduction without ghosting.

Image controls include two gamma settings and two color temp presets, plus a user mode. The RGB sliders start center-range, but their adjustments are coarse and achieving precise color is difficult.

The MAG341CQ ships in User mode, which offers below-average accuracy with a light gamma curve and whites that look distinctly green. If you do nothing else, set the gamma from 1.8 to 2.2. It will improve image depth significantly. Calibration was challenging because the RGB sliders do not have fine resolution; each click makes a large difference in color. But after a bit of back and forth, we managed a decent gain in quality with the greatest improvement being gamut saturation. We strongly recommend using our settings below to get the most out of your MAG341CQ:

The MAG341CQ is great for general computing, like web browsing, document editing and spreadsheets. It even makes a decent display for Photoshop, though it won’t provide reference color accuracy. The image is very sharp and clear with no artifacts from the anti-glare layer. We appreciated the ability to run Windows 10 at 100 percent dpi scaling, which provides the clearest possible image.

Gaming on the MAG341CQ was a good experience both with and without FreeSync. If you have a speedy graphics card, you won’t miss FreeSync if framerates stay in the 90-100 frames per second (fps) range. But for owners of slower graphics cards, FreeSync worked without issue. The overdrive also had no problems reducing motion blur without visible ghosting.

We really enjoyed the extra color and contrast afforded by the wide-gamut, VA panel. Though some color inaccuracies crept up during testing, it didn’t diminish the gaming experience. VA’s greater dynamic range is always an asset, and contrast is the most important element of good imaging. Color errors can be overlooked when they’re not too far off the mark and contrast is as deep as what we saw with the MAG341CQ.

Our only caveat is that if you buy the MAG341CQ, you should have a PC capable of maintaining framerates over 48 fps. With no LFC, there will be some tearing when the monitor renders below that speed. Since the MAG341CQ sports 3440x1440 resolution, you’ll need a mid-grade video card at least. And of course, if you can run closer to 100 fps, there won’t be any artifacts to spoil the fun.