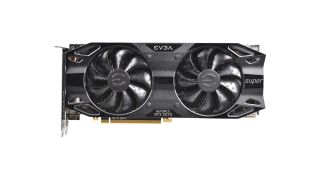 When it comes to finding the best tech deals on GPUs, it's all relative. The EVGA GeForce RTX 2070 Super Black Gaming card is selling on Newegg for $490, a total of $30 off, with promo code "VGAPCJA245" and a $20 rebate.

EVGA GeForce RTX 2070 Super Black Gaming: was $510, now $490 @ Newegg
It's still a lot of money, but this is a relative bargain for Nvidia's awesome TU104 GPU, as originally found in the far more expensive  RTX 2080, a $699 board. It'll crush most titles at 1440p, run a lot of games very nicely at 4K and throws playable hardware ray tracing into the mix. Enter code "VGAPCJA245" and use the $20 rebate to get the card for this low price. View Deal

In our 2070 Super review, we found a GPU that will batter most games into high-refresh-rate submission at 1440p and also do a decent job at 4K in a solid array of titles. In truth, you'd have to go all the way to the much pricier RTX 2080 Ti to see a major difference in gameplay.

If you're wondering about Nvidia's upcoming 7nm Ampere GPUs, yes, they're expected to be faster but will also almost certainly be far more expensive. Long story short, this 2070 Super will still look like decent value when the new boards launch, and in the meantime you can get on with enjoying the best games the PC has to offer.