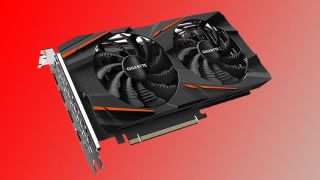 Though it was released back in 2017 and has since been replaced by AMD's more-powerful Navi cards, including the RX 5700, the Radeon RX 580 remains a masterful card for 1080p gaming. Now the price for an RX 580 is as low as we've ever seen it.

Right now, Newegg's eBay store has a Gigabyte Radeon RX 580 with dual fans for just $134. That's not only the lowest price we've ever seen, but also $35 less than Newegg charges for the same card on Newegg.com.

While it's no longer one of the overall best graphics cards on the market, the Radeon RX 580 is still a fantastic choice, particularly at this epicly-low price. With its 1,355 MHz boost clock and 8GB of GDDR5 memory, the card will allow you to play almost any game at 1080p on high settings and many games at 2K resolution with decent settings.

Radeon's RX 580 comes with its Windforce cooling system that has two, 90mm fans and a composite heat pipe that allow it go higher than the stock Radeon RX 580's top-speed of 1,340 MHz. It has 1 HDMI and 3 DisplayPort outs for maximum multi-monitor support.

9 Comments Comment from the forums
Be In the Know