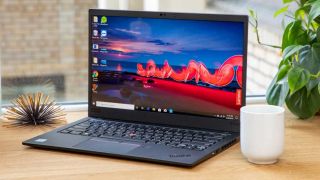 A new, 6-core version of our favorite productivity laptop, the ThinkPad X1 Carbon (7th) gen is on a huge sale. For its part in the Cyber Monday tech deal madness, Lenovo has significantly discounted all configurations of the X1 Carbon, including one with Intel's  "Comet Lake" Core i7-10710U CPU, the first 6-core processor for ultrabooks.

There are a number of other configurations on the same page. These include a $999 starting config that has How much was this configuration of the X1 Carbon before? Lenovo claims that it has a Core i5 CPU, 8GB of RAM and a 256GB SSD.

However, we strongly recommend that you get the $1,319 config with the Core i7-10710U CPU, because it has the most powerful processor and it has the most RAM. Be careful, because there is another, identically-priced config that has a Core i7-10210U CPU, which is only quad-core; that model has a 512GB SSD.

The RAM on the X1 Carbon is soldered to the motherboard, so no matter what other specs, you should definitely get a model with 16GB. However, you can upgrade the SSD on your own for much less than Lenovo charges to get higher-capacity storage.

We haven't tested the X1 Carbon with the Core i7-10710U CPU inside, but we did a recent review of a Dell XPS 13 with Comet Lake and were really impressed with the performance and battery life. Having six cores, as opposed to the four cores on all other models, should make a big difference when multitasking.

Just a few months ago, we published our ThinkPad X1 Carbon (7th Gen) review, which is this laptop, but with an 8th Gen Core CPU. We absolutely loved the keyboard, the lightweight chassis, the bright screen, the long battery life and the great mix of ports, which includes two USB Type-A connections, two Type-C / Thunderbolt ports and full-size HDMI.

Lenovo 14" ThinkPad X1 Carbon...
BHPhoto
$1,564.95
View
Show More Deals
We check over 130 million products every day for the best prices
No comments yet Comment from the forums
Be In the Know