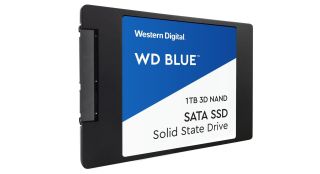 Update: Unfortunately, this deal has ended, however, it may come back later today. Check out more SSD Deals here.

This SSD comes built on 3D NAND, and offers sequential read and write speeds of 560 MB/s and 530 MB/s, respectfully. Random Read IOPS are rated at 95k, and random write IOPS at 84k.

Western Digital claims that the unit has been tested to achieve a Mean Time to Failure of 1.75 million hours, and rates its durability at up to 400 TBW (Terabytes written). Consequently, the manufacturer also backs this 1 TB SSD up with a solid 5-year warranty.

If you’re looking for a new system drive and you’re not willing to splurge almost twice the money on a faster M.2 drive, this 1 TB WD Blue 2.5” SSD can be a great way to get some SSD goodness into your system without breaking the bank, whether it be for a notebook, desktop, or some other system.