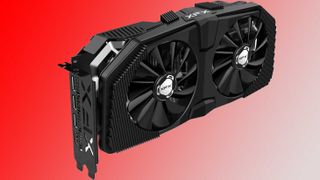 AMD's Radeon RX 5700 XT chip has sat at the top of its consumer product stack since it launched in August.  Cards based on the chip tend to cost well over $400, which is well worth it, because the 5700 XT can provide really strong 2K gaming and solid 4K gaming at acceptable settings.

XFX Radeon RX 5700 XT: was $409, now $369 @Best Buy
This dual-fan card features AMD's high-end, navi GPU. While we haven't this particular card, the 5700 XT chip can play 4K games at reasonable settings and frame rates. Getting that kind of functionality for under $400 is huge.View Deal

The RAW 2 has 1 HDMI and 3 DisplayPort outputs. XFX recommends that you use this with a power supply that can provide at least 600 watts of juice.

If you're looking for a less expensive AMD graphics card, check out our Cyber Monday Radeon deals page.