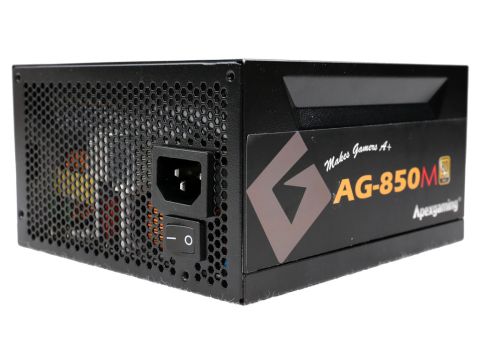 Using results from the previous page, we plotted a chart showing the AG-850M’s efficiency at low loads, and loads from 10 to 110 percent of its maximum-rated capacity.

Under normal loads, the AG-850M follows Corsair's RM850x. With light loads, the difference between those two power supplies is large.

In the following tests, we measure the AG-850M's efficiency at loads significantly lower than 10 percent of its maximum capacity (the lowest load the 80 PLUS standard measures). The loads we dialed were 20, 40, 60, and 80W. This is important for representing when a PC is idle, with power-saving features turned on.

The fan profile is out of this world; even under 20W of load, the blades spin at 1780 RPM, making a ton of noise. Stranger still is that, in the next two tests, the fan speed drops a bit, increasing again by the fourth test.

In general, this PSU's efficiency is low under light loads. It's only during the third test that the AG-850M exceeds 80%. Surely a high fan speed plays a significant role. After all, a few watts have a big impact on our efficiency calculation when the power supply isn't doing much otherwise.

This PSU's power requirements in standby mode are low.

The first chart below illustrates the cooling fan's speed (in RPM), and the delta between input and output temperature. The results were obtained at 36°C (96.8°F) to 45°C (113°F) ambient temperature.

The next chart shows the cooling fan's speed (again, in RPM) and output noise. We measured acoustics from one meter away, inside a hemi-anechoic chamber. Background noise inside the chamber was below 6 dB(A) during testing (it's actually much lower, but our sound meter’s microphone hits its floor), and the results were obtained with the PSU operating at 36°C (96.8°F) to 45°C (113°F) ambient temperature.

An overzealous fan profile is this PSU's most obvious flaw. Even in normal ambient conditions, the fan starts with over 30 dB(A) of noise and quickly enters the 35-40 dB(A) range. With higher than 140W load it exceeds 40 dB(A), and above 320W it passes the 45 dB(A) mark.