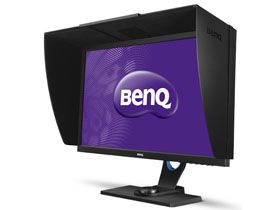 Our entire group today is made up of wide-gamut professional monitors with factory-certified calibrations. We have the NEC PA272W and PA322UHD along with the EA244UHD. Even though it’s part of the business-class EA-series, it does offer Adobe RGB color along with terrific out-of-box accuracy. BenQ’s 16:10 pro screen is here as well; the PG2401PT. Rounding out the pack is HP’s superb Z27x.

All of the monitors offer plenty of peak output for the majority of applications but the SW2700PT just edges its way to the top. Since it includes a hood, you can easily set it up at an outdoor shooting location.

For such a bright backlight a third-place finish in max black level bodes well for this panel’s native contrast.

Not every professional display has over 1000:1 contrast but the SW2700PT wins the day once again with 1121.7:1. The image has plenty of depth and a very wide dynamic range.

If you want a really dim picture the SW2700PT will oblige with 11.4516cd/m2 minimum brightness. Even in total darkness it’s too dim for our taste. We’ve added backlight settings for more commonly-used levels at the end of the previous page.

When the backlight is this low, black levels are almost unmeasurable. .0111cd/m2 is near the limit for our C6 luminance meter.

Contrast stays fairly consistent throughout the backlight’s operational range. This level of performance is expected in a high-end pro screen and the SW2700PT is one of the best.

Since we didn’t perform a calibration these tests reflect us setting the backlight to a 200cd/m2 output level. No other changes were made to color, white point or gamma. We also left the contrast control on its default setting. These numbers are the same in Standard, sRGB and Adobe RGB modes.

As expected the sequential (on/off) contrast ratio remains near 1100:1. We’ve said many times you can’t have too much contrast and the SW2700PT proves that. It has one of the best images we’ve seen on any monitor regardless of price.

BenQ pulls out another win in the ANSI contrast test. If not for a slightly higher black level in the lower right corner of the screen this result would have been even better. The AU Optronics panel in use here is one of the best 27-inch QHD parts we’ve seen to date.