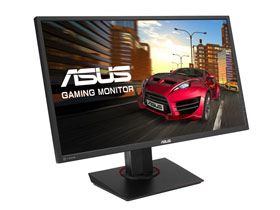 We don't hate TN monitors by any means and the latest panels look pretty good, but we still prefer IPS. In this case, the MG278Q matches its more-expensive stablemate in every area except for contrast and exceeds it in usable FreeSync range. Depending on where you shop, you'll save as much as $200 over the MG279Q. For gamers looking to save a few bucks it's a great choice.

Though many gaming enthusiasts are willing to spend a lot of money creating the ultimate system, there are just as many, if not more, who want to maximize performance on a budget. Unfortunately, the addition of FreeSync and G-Sync to the feature lists of many gaming monitors has raised the price of admission somewhat.

We've talked about specific things that must be present for a display to qualify as a "gaming display." A high refresh rate is the first box that needs checking. 60Hz just won't cut it when even value-priced graphics boards can drive FHD and QHD resolutions to 80fps or more. The market is responding to that fact with plenty of choices that can hit 144Hz without overclocking.

But equally important to have is some flavor of frame-rate matching. The best way to ensure smooth motion is to lock the video card and display together so the panel only draws frames when told to. By putting the signal source in the driver's seat, you'll never see any tears or stuttering caused by mis-timed frames hitting the display during its refresh cycle.

Nvidia was first out of the gate with G-Sync, and we've reviewed several excellent monitors using G-Sync technology. The promise of value however, comes from AMD's FreeSync, which simply adds functionality to the existing DisplayPort interface and is a completely open standard, which means manufacturers don't need to pay a license fee to include the feature in their products.

Recently, we reviewed the MG279Q, one of the first FreeSync/144Hz IPS monitors to hit the market. Asus' MG279Q monitor is priced at a premium level, so the company decided to create a less-expensive alternative, the MG278Q. It differs in two main areas: it's TN-based and has a maximum FreeSync rate of 144Hz versus 90.

If you've narrowed your 27-inch gaming monitor choices down to Asus' two MG-series screens you're probably contemplating what the extra cost of the MG279Q will get you. First off, it sports an IPS panel where the MG278Q uses TN. It should be noted that it's one of the better TN panels we've seen lately. It won't give you the viewing angles of IPS but it does offer good color accuracy, plenty of brightness and decent contrast.

The second consideration is the FreeSync range. The MG279Q will run at 144Hz but in FreeSync mode it tops out at 90Hz. In practice that's only a limitation if you're running a very fast video card. Our R9 285 testbed was not able to exceed 90fps in the games we played.

Finally, there's the price. You'll save anywhere from $50 to $200 (depending on where you buy) by choosing the MG278Q. In both cases the resolution is QHD, so it really boils down to the panel tech and the upper limit of the FreeSync range. Otherwise, the less-expensive screen has the same bright LED backlight and all the other features a gamer could want.

So if you've decided to compare performance, please read on because we'll show you just how the two Asus FreeSync screens stack up to one another. Can the MG278Q satisfy at its lower price point? Let's take a look.