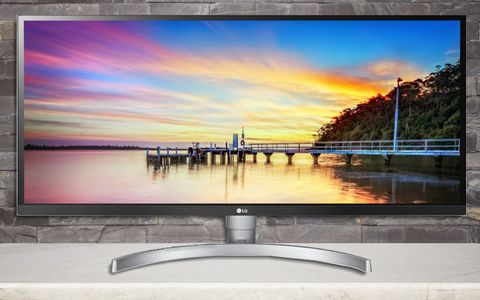 This LG ultra-wide is an impressive value and excellent performer that should merit serious consideration from gamers and productivity users on a budget.

Since appearing about four years ago, ultra-wide monitors have lived at the premium end of the display market. Whether flat or curved, prices haven’t come down much since we first started seeing this screens. They remain popular with gamers, the top models still cost $1,000 or more.

But if you’re willing to accept a non-screen with 2,560x1,080 resolution, then LG has a solution–the 34WK650. At 34 inches, it’s reasonably compact for a 21:9 monitor, but still offers a good deal of space for opening multiple apps, enjoying immersive games, or watching movies. Pixel count is a bit low compared to other 21:9 screens. However, its pixel density is the same as a 27-inch, Full HD 16:9 screen, but with some extra display real estate.  The 34WK650 also has plenty of performance credibility with a 75Hz refresh rate, FreeSync and HDR10 support. Most significantly, it sells for under $400.

At first blush, some will decry the 34WK650’s resolution, since it’s lower than many other ultra-wides, and move on. But wait, there’s more: 82 pixels per inch (ppi) is the same pixel density as a 27-inch Full HD monitor, which is common for PC users. Other features put the monitor on par with displays costing much more. Did we mention that the 34WK650;s sub-$400 asking price?

All users will appreciate the high-quality, IPS (in-plane switching) panel, which offers accurate color, HDR output of 366 nits, a 75Hz refresh rate and AMD FreeSync for gaming. The latter operates to a minimum frame rate of 56, which is admittedly higher than we’d like to see. This is offset by the fact that the video card you connect it to only has 2.76 megapixels to move about. This is a budget monitor after all; it wouldn’t make sense if it only shined with an $800 Nvidia or AMD pixel pusher. The 34WK650 will satisfy gamers with modest systems, likely more so than a premium screen with greater resolution and / or a higher refresh rate.

The 34WK650 ships in three pieces and assembles without tools. The panel snaps on to the upright, or you can use a monitor arm thanks to the included 100mm VESA mount lugs. But you’ll need to source your own hardware for that. LG includes a white HDMI cable and external power supply to match the panel’s trim. You also get a snap-on clip to tidy up the wires. A printed quick-start guide is in the box, along with supporting documentation on a CD. We also found a calibration data sheet that didn’t specify which picture mode meets the published results. We’ll provide more detail on that in our benchmark tests.

The 34WK650 has a flush-mounted bezel that is a bit wider than most: 0.47 inch on the top and sides and 0.83 inch on the bottom. You can’t see it when the power’s off, but it is visible when there’s an image present. At the bottom center is a single control joystick/button combo. It offers a nice feel and intuitive controls all monitor functions. It’s an example that all manufacturers should follow.

The side profile is a slim 2 inches and looks even thinner thanks to the white plastic back piece. This is a styling feature we’ve come to appreciate from all LG monitors. Not only does it set the company's monitors apart, it provides a refreshing change from the acres of black plastic seen in most office spaces.

Heat--what little there is--exits through a thin grille line just above the upright’s attachment point. Speakers fire through two more openings at the panel’s bottom edge and sport a little more power than most and can be further enhanced with MaxxAudio tuning. When trying out the speakers, they produced a surprising amount of bass, along with clean highs that were never harsh, even at maximum volume. While an external system or headphones can sound better, these are some of the best built-in speakers we’ve heard on a monitor.

The slim and elegant stand is finished in a silver plastic that looks like brushed aluminum. Adjustments include 4.33-inch height, 15-degree back tilt and 5-degree forward tilt. There is no swivel or portrait mode. Movements are firm and solid without excessive play.

Inputs are one DisplayPort 1.2 and two HDMI 2.0 with HDCP 2.2 content protection for your Blu-Rays or the HD streaming service of your choice. There are no USB ports. Analog audio is supported by a single 3.5mm headphone output. The connections are all rear-facing and high on the monitor’s back, making them easy to reach during installation.