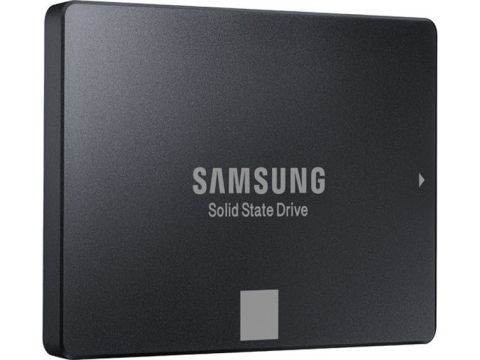 The Samsung SSD 750 EVO 500GB packs mainstream performance but entry-level endurance specifications, which is a game-changing mix that can disrupt the entry-level SSD market.

Every product in the chart utilizes 3-bit per cell flash, which marks the first time we've removed all MLC products from an entry-level chart. MLC prices have shot up, taking retail SSD pricing with it. TLC flash is projected to achieve 80% market share by the end of 2016, which is an eventually that we've warned about for several months. Like it or not, now if you want MLC you have to pay a premium for it.

All of the products in our test deliver strong sequential read performance. The Crucial BX200 480GB is the only drive that fails to exceed 500 MB/s at low queue depths. The Samsung 850 EVO leads the 750 EVO by 21 MB/s at QD2.

The Samsung SSD 750 EVO delivers nearly 500 MB/s in the SLC buffer zone and 325 MB/s of native TLC performance. The performance is much higher than the other products (barring the 850 EVO and SK hynix SL308).

SLC buffers are becoming the norm, so we are working on a new test that will measure SLC and TLC performance separately, which will allow us to list the results in different charts. Companies tackle the SLC buffer differently, so we are working to isolate the variable amount of SLC area. Some manufacturers use a static volume with a fixed buffer size, while others use a dynamic volume that alters the buffer size based on how much data the user has stored on the flash.

The SSD 750 EVO follows the 850 EVO, and even the 850 Pro, with high random performance at queue depth 1. The new SK hynix SL308 nearly hits the same milestone, but the other TLC-based products can't compete. Samsung SSDs are excellent at real-world application performance, and this synthetic test shows why. This test defines the gap between Samsung and the other entry-level SSDs, just as it has highlighted the difference in the mainstream and premium markets for the last two years. Samsung has engineered in some SSD magic at low queue depths and is using it to dominate the market.

The 750 EVO even outperforms the 850 EVO in random reads at high queue depths. The 750 EVO's controller has a year of firmware maturity under its belt, and Samsung used the time to optimize performance.

Random performance defines the user experience during a normal desktop workload, and Samsung runs away from the competition again. The 750 and 850 EVO deliver superior small block performance at low queue depths, but the Samsung SSDs also scale very well up to higher queue depths.

The SSD 750 EVO 500GB trailed by a small amount in both of our previous sequential tests, but the small delta wasn't enough to lop off this much performance during a mixed read/write workload. It appears the 2-core version of the MGX controller can't deliver the same performance in a mixed sequential workload as the Samsung 3-core controllers.

When Samsung introduced its 3-core design it announced that it dedicated one core to reading, one to writing and the other to background activity. We translated that into one for reading, one for writing and one for arithmetic. The mixed sequential workload chart reveals that the 750 EVO's performance slows when you move three CPU-intensive tasks to just two cores.

Samsung did not target the 750 EVO at the professional market, and the steady state performance reveals that users should avoid using it for extreme write environments. The endurance ratings indicate the same, but that won't stop some users from trying.

The SSD 750 EVO is a beast with random data. The performance stays over 5,000 IOPS and remains consistent even under steady-state conditions. We didn't expect performance to remain this high, and you can see that many of the other entry-level TLC-based products have a difficult time in this test; some SSDs can even drop to the single-digit IOPS range during intense workloads.