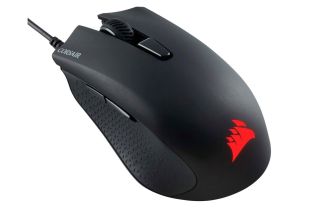 We write plenty of content on how to do budget builds, but you'll need some budget peripherals to go with these. It's best if they're also from a reputable brand, so we were pleasantly surprised when we saw Corsair's Harpoon wired RGB gaming mouse listed at BestBuy for just $10. Ten. Dollars. For a genuine Corsair RGB gaming mouse.

For specs, you'd think it'd be a no-frills mouse, but it's actually not half bad. It's wired, yes, but it has RGB lighting and six buttons, and that's all most of us really need because they include navigation buttons as well as a DPI switcher. On that front, the optical sensor can track at up to 6000 DPI, which is also more than plenty for most use cases.

Corsair Harpoon RGB Gaming Mouse: Was $30, Now $10
At $10, you're not going to find another mouse this good. It has RGB lighting and six buttons. The optical sensor can track at up to 6000 DPI.
View Deal

It even has Omron switches under the left and right mouse buttons, and if you didn't know, these are known to be some of the most satisfying and reliable switches used in mice.

The package is topped off with a rubberized texture on the left, and you'll have access to Corsair's CUE software to control the lighting and programmable buttons.

If you're worried whether there might be a catch, don't. Customer reviews are very favorable even at the old price, so now at $10 you're bound to be happy with it. We don't know for how long it will stay at this price though.