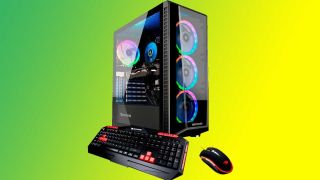 If you're looking for a sub-$1,000 gaming PC this Cyber Monday tech deals season, this desktop is currently your best choice. Available from Best Buy for $999 (reduced from $1,299), this iBuyPower-brand PC combines an Nvidia RTX 2060 Super card with an Intel Core i9-9700F CPU.

iBuyPower hasn't skimped on the memory and storage, either. This desktop comes with a full 16GB of RAM, a 480GB SSD and 1TB hard drive.  It also has some nice-looking RGB fans on the front.

We've never seen a desktop with both a Core i7 and RTX 2060 Super selling for under $1,000. That means you'll get fantastic 2K gaming performance and even some ray-tracing.  In our tests, an RTX 2060 Super was even able to play demanding  games such as Battlefield V  at 4K and Ultra settings, though frame rates hovered around 30 fps for that kind of load.

So that's about $865 before you buy the motherboard, CPU cooler, power supply, case and case fans. It's almost certain you'd be spending at least $1,100. Deciding whether to build or buy a gaming PC is a very personal decision, but in this case, the cost definitely favors buying.

If you're looking for another gaming desktop or the parts to build your own, check out our Cyber Monday tech deals page.