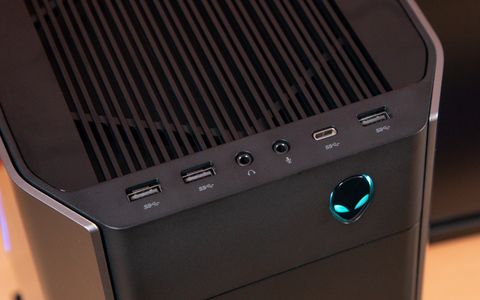 The Alienware Aurora R8 is a bulky gaming rig that offers strong performance and a whole lot of ports.

Who knew that a spaceship would be relatively easy to repair? That’s the biggest trick behind the Alienware Aurora R8 ($783.99 / £799.00 to start; $2,624.99 as tested), with tool-free upgradeability and a swing-out power supply to reveal the internals. Our review unit was also powerful, packing an Intel Core i9-9700K and an Nvidia GeForce RTX 2080, but it’s chunkier than competitors, and a few components are slightly harder to reach than they should be.

Alienware’s aesthetic hasn’t changed at all on the desktop front. This year’s Aurora looks the same as it has in the past. It has a UFO-inspired look, with aggressive angles and some simple RGB lighting. The side panels are a dark gunmetal with three RGB light bars pointing towards its center (these can be customized in the Alienware Command Center software). The other lighting is on the Alienware logo on the front, which breaks up the all-black section between the two dark silver panels. Both the front and the left side panel have ventilation holes, as does the top.

I do wish Alienware would consider using some more aluminum. The Aurora is very plasticky (albeit metal reinforced). And while that makes sense for the cheaper base model, it feels a bit out of place once you pass the $2,000 configuration mark.

I appreciated the port variety on the front of the Aurora. The top is home to three USB 3.0 Type-A ports, a USB Type-C port and separate headphone and microphone jacks. On the back are another nine USB Type-A ports (eight USB 3.0, one USB 3.1) just begging for peripherals and external storage, as well as another Type-C port, an Ethernet jack, an SPDIF port, a variety of audio jacks and DisplayPort.

It’s easy to get into the Aurora, though you’ll need tools the first time. There’s a single Phillips head screw holding in a lever in the back of the case. When that’s removed, pressing the lever makes the left side panel pop off, revealing the power supply. An Alienware representative told me that the screw is there just to keep the machine safe during transit and doesn’t need to be replaced.

Two switches on the back lock in the power supply and, when released, it can swing out on a hinge to reveal the rest of the components, including the graphics card (held up by a bracket), RAM, CPU water cooling and, in our configuration, a pair of drive bays just waiting for some extra storage.

However, the PSU is a bit in the way for more major changes, like the case fans, and replacing the PSU itself would likely be a major challenge because of the unique design. Despite that, the cable management in our unit was acceptable with the exception of a GPU power cable plugged into the motherboard resting on the GPU itself.

Thanks to an Nvidia GeForce RTX 2080, the Aurora is capable of gaming at the highest settings without much trouble, as well as enabling ray tracing in select games. When I played Anthem on ultra settings at 4K, it ran between 38 and 48 frames per second (fps) with some heavy screen tearing. But when I turned it down to FHD, it ran at a smooth 106 - 121 fps, only dropping to those lower frame rates during some intense flying.

The Aurora played the Hitman benchmark (ultra settings) at 143 fps in FHD, tying the Trident and beating the average. The frame rate dropped to 77 fps in 4K, just below the gaming desktop average and MSI’s machine.

On Shadow of the Tomb Raider (highest settings), the Aurora hit 88 fps in FHD and 30 fps in 4K, falling just below the gaming desktop averages (94 fps and 34 fps, respectively) but only below the Vengeance in terms of our comparison group.

On the Grand Theft Auto V benchmark (very high settings), the Alienware ran at 97 fps in FHD and 34 fps in 4K. The former number is higher than average, but the latter is lower.

The Aurora earned a perfect score of 11 on the SteamVR performance test.

To stress test the Aurora, I turned to Metro Exodus, which has an RTX preset in the benchmark. I ran that 15 times to simulate 30 minutes of gaming. Across the 15 runs, the game ran at an average of 55.6 fps and was quite consistent throughout. The CPU reached an average clock speed of 4.2 GHz and average temperature of 53.2 degrees Celsius (127.8 degrees Fahrenheit). The GPU ran at an average temperature of 76.3 degrees Celsius (169.3 degrees Fahrenheit).

On our Handbrake video editing test the computer transcodes a 4K resolution video to 1080p. The Aurora finished that task in 7 minutes and 14 seconds. That’s speedier than both the Vengeance and Omen but below average (6:56) and the Trident (5:38).

The Aurora copied 4.97 GB of files in 8 seconds, which equates to 636.2 MBps. That’s not only faster than the average (426.7 MBps) but also faster than all of its competitors.

It took Alienware’s rig 29 seconds to pair 65,000 names and addresses in our Excel macro test, besting the 32-second average and falling only behind the Trident.

Our review unit didn’t come with a keyboard or a mouse, which makes sense for those who already have them lying around.

You can add one of each on Dell’s website (Dell is Alienware’s parent company) for no additional cost in the U.S.

In the UK, the keyboard comes in the box by default, though you can remove the mouse in Dell’s configurator to save £13.84.

The Aurora comes with a light software preload. Alienware Command Center continues to be the centerpiece of the suite with the ability to customize RGB lighting, allow one-click overclocking and serve as a launcher for games. Alienware Mobile Connect lets you make calls, send texts and see notifications when you connect your phone to your computer.

Of course, the Aurora comes with Windows 10, which means all of the bloat that comes with that operating system, including Plex, Phototastic Collage, PicsArt and Fitbit Coach.

Alienware sells the Aurora R8 with a one-year warranty.

The Alienware Aurora R8 is a strong performer that’s easily upgradeable, but its design is bulky compared to the cleaner, more modern aesthetics offered by competitors. I’m looking forward to a redesign with the company’s new design language, like what we saw on the Alienware Area-51m gaming laptop.

If you want something smaller, the MSI Trident X has a thinner profile with a swinging door that is also easy to upgrade. A configuration with a Core i9-9900K, 16 GB of RAM and otherwise comparable specs currently sells for $2,499.99. That also uses entirely off-the-shelf parts.

But if the spaceship aesthetic appeals to you and you want more options in configuring your desktop, the Aurora is the better option for those seeking something personalized out of the box.