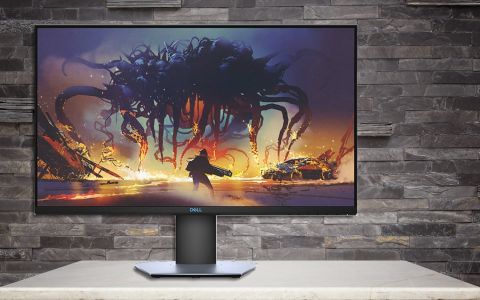 The Dell S2719DGF offers excellent panel response, low input lag and superb out-of-box color accuracy. It won’t deliver the contrast of a VA panel, but we enjoyed gaming at 155Hz with FreeSync. Those looking for a 27-inch QHD display should give it serious consideration.

Twisted nematic (TN) monitors get a bad rap, but they are usually the fastest screens for gaming. TN panels have the highest refresh rates and usually the quickest response and lowest input lag when compared to vertical alignment (VA) and in-plane switching (IPS) technologies. And many of the preconceptions about their color quality are not universally true.

Today, we’re checking out Dell’s S2719DGF. It’s a 27-inch TN panel with a 155Hz overclock, FreeSync and QHD resolution. It’s also one of the best-looking TN screens we’ve ever seen. In actual use, it can easily be mistaken for an IPS display, and that’s saying something.

The S2719DGF is priced at the low-end of the premium category. With an MSRP at the time of writing of $360 / £370.03, it competes with IPS and VA panels sporting similar features. The main attraction is speed. It runs at 144Hz natively and 155Hz when the overclock is engaged and the signal comes through its DisplayPort input. It includes HDMI 2.0 and HDMI 1.4 as well. Adaptive sync is of the AMD FreeSync variety and works down to 40Hz. This wide spread allows for Low Framerate Compensation, which doubles frames when the refresh drops below 40Hz. This way, you’ll never see a tear, even with with less-capable video cards.

Aside from its versatility, the S2719DGF comes with one of the best TN screens we’ve ever seen. Its image goes against every preconception. Color is rich and saturated, not to mention accurate. Viewing angles are surprisingly good. And of course, the speed that TN is known for is there. Let’s take a look.

Dell’s clamshell-style carton opens to reveal the S2719DGF in three parts: upright, base and panel. The contents are easily assembled without tools. As always, Dell includes quality cables, in this case USB 3.0 and HDMI. There’s no DisplayPort, which seems an odd omission, considering you can only run at 155Hz over DisplayPort. An IEC power cord is also in the box for the monitor’s internal power supply. Supporting documentation is found on Dell’s website.

Dell’s familiar design theme is well-represented by the S2719DGF. A thin 6mm bezel surrounds the top and sides, while a slightly wider 14mm strip runs across the bottom. The anti-glare layer is flush-mounted for a bezel-free look when the power is off. Running your fingers across the bottom reveals the tiny control buttons. The power toggle doubles as a white LED, while six more keys provide direct access to picture modes, FreeSync, Dark Stabilizer, brightness/contrast, the on-screen display (OSD) and exit. Every press pops up icons denoting the buttons’ functions, as well as a status bar at the top of the screen.

The stand is very solid with a nice weight and firm movements. The height adjustment range is five inches, and you get -5 degrees to 21 degrees of tilt, 45 degrees swivel in each direction and, interestingly, a portrait mode that goes both ways. If you’d rather use a monitor arm or bracket, a 100 mm VESA mount is provided under the snap-on stand.

The panel has a gentle curve across the back that makes the side profile of average thickness. Ventilation is cleverly hidden in down-facing grills. The input panel is tucked up under the upright and includes one each of HDMI 1.4, HDMI 2.0 and DisplayPort 1.2. Only the latter can be used at 155Hz, but the HDMI 2.0 port supports FreeSync up to 144Hz. Audio is supported by 3.5mm input and output jacks. There are no built-in speakers, but you can control volume in the OSD.

In general use, the S2719DGF is perfectly competent for things like web browsing and word processing. Its excellent color—particularly its ideal D65 white point—makes it an excellent companion for getting work done or researching your next purchase. Color-critical apps are also a good fit as the S2719DGF sticks very close to the sRGB color gamut. It makes a good tool for Photoshop and other graphics-oriented work and can perform well without any fiddling in the OSD. The Standard picture mode is well-suited for whatever you need to do.

Gaming is a similarly great experience, thanks to FreeSync. We enjoyed playing Tomb Raider at an average framerate around 50 fps. The Dell’s QHD resolution paired well with our Radeon R9 285 video card. After trying all three overdrive settings, we settled on Fast (the middle one) as the best choice. It smoothed out the action nicely without producing any visible ghosting or other artifacts.

Out of curiosity, we made a comparison between FreeSync at middling framerates versus no adaptive sync at higher ones. We did this by connecting the S2719DGF to our mega-gaming rig with a GeForce GTX 1080 Ti Founders Edition. It had no trouble keeping speeds above 100 fps, even in demanding titles like Far Cry 4. The surprising thing is there were no frame tears, and yes, we made sure to turn V-Sync off. No matter how fast we moved the mouse, vertical lines remained unbroken. The one artifact we observed was an occasional halo effect when dark objects against a light background suddenly changed in size. This was visible when the camera zoomed in or out quickly or in third-person games, like Tomb Raider.

The only thing we wished there were more of is contrast. While the S2719DGF’s contrast is typical of IPS and TN screens in this price range, we’ve become spoiled by some of the VA panels we’ve seen of late, like the MSI Optix MPG27CQ. Even though the MPG27CQ’s color is oversaturated, its deep blacks and broad dynamic range offer a more three-dimensional experience. The Dell has great color for sure, but we’d like more pop.

The OSD is divided into eight sub-menus, organized to separate gaming and image adjustments from other features. There are 11 picture modes, of which Standard is the default. It is also the best preset for accurate color and doesn’t require calibration. Tweakers can call up the Custom Color mode and work with a two-point white balance, plus hue and saturation sliders for all six colors.

The Game menu offers a display alignment grid along with a framerate counter and countdown timer. Here is where you’ll find the overclock toggle that allows access to the S2719DGF’s full 155Hz refresh rate. You can also turn FreeSync on or off and choose between three overdrive speeds. The middle option, Fast, strikes the best balance between blur reduction and ghosting. A Dark Stabilizer feature can increase shadow detail. If you use the FPS, RTS, or RPG picture modes, color hue and saturation controls become available.

To access the two-point white balance and CMS sliders, choose Custom Color. The controls have fine resolution and can create a precise calibration. But it offers only the tiniest improvement over the out-of-box Standard mode. The only thing missing here is a gamma control. Luckily, the S2719DGF tracks the 2.2 standard correctly.

Additional image enhancements, a Dynamic Contrast toggle and Sharpness slider, are in the Display menu. We suggest leaving both of these alone. The image looks great without additional help.

The Personalize menu lets you reprogram four of the six control keys for quick access to commonly used functions. If the power LED is too bright, you can turn it off here. USB ports can be turned off in Standby mode to save energy. Signal info and other less-used items are grouped in the Others menu. You can also reset the S2719DGF to its factory defaults.

When we measured the Standard picture mode, we found it easily qualified for our No Calibration Needed list. Nevertheless, we calibrated the Custom Color mode to see if we could do better. We gained slightly in grayscale accuracy, but the difference was miniscule. We also saw a tiny bit more color saturation. Most users will be satisfied to leave the S2719DGF in Standard mode and adjust brightness to taste. Maxing the backlight produces around 350 nits brightness, as claimed. If you want to try our settings, we’ve provided them below:

Next Page Brightness and Contrast
16 Comments Comment from the forums