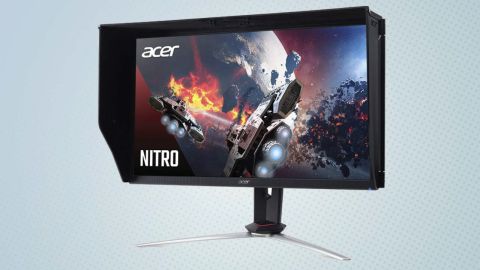 The Acer Nitro XV273K makes a few compromises to get its price under $1,000. But it still offers fantastic 4K gaming at 144Hz, along with the ability to connect to both FreeSync and G-Sync systems.

Thus far, the combination of 4K resolution (aka UHD), a 144Hz refresh rate, HDR and adaptive sync in a gaming monitor has proven to be an expensive proposition. The Asus ROG Swift PG27UQ and Acer Predator X27 will both extract at least $1,800 from your wallet. Acer also offers the Predator XB273K for around $1,200. But if you’re willing to go with AMD FreeSync (the aforementioned three offer Nvidia G-Sync) and a little less HDR contrast, the Nitro XV273K offers 4K and 144Hz for under a grand ($900 / £900).

OK, we’re still talking about a premium gaming monitor at a premium price, but the Nitro offers quite a bit to owners of high-end gaming rigs. It’s a 27-inch IPS panel that’s equipped for AMD FreeSync 2 HDR down to 40Hz but has also earned its way onto Nvidia’s G-Sync Compatible list. We’ll show you how to make this happen and play a few games to compare the monitor’s performance with the two competing technologies.

Until recently, gaming in 4K meant a maximum refresh rate of 60Hz. That all changed with the introduction of Asus’ ROG Swift PG27UQ and Acer Predator X27. Both those monitors, as well as the Acer Predator XB273K, can run at a reliable 144Hz while delivering a super-sharp pixel density of 163 pixels per inch (ppi) at 4K resolution. It’s hard to image clearer detail, and if you have enough graphics horsepower (a GeForce GTX 1080 should be considered the minimum), you can run your games at the highest resolution available today at over 100 frames per second (fps).

Gamers will also athe Nitro XV273K either FreeSync or G-Sync, depending on their graphics card choice. That’s because the monitor passed Nvidia’s tests in order to be placed on its G-Sync Compatible monitors list, which is for monitors that Nvidia certified to support G-Sync after being released.

All this goodness wouldn’t be much without DCI-P3 color and HDR, and the Nitro XV273K offers both. The panel is also VESA-certified to DisplayHDR 400, which means bright highlights and deep blacks in HDR mode and vivid color that goes well beyond sRGB.

Despite the Nitro XV273K’s more desirable price, compared to the Predator X27 and Predator XB273K, it still includes the same high-quality light hood and a factory calibration with data sheet.

The accessory bundle also sports two DisplayPort cables and one USB 3.0 cable, along with the external power brick. The monitor ships pre-assembled with the base and upright bolted together. Simply lift it out, make your connections and go.

Styling is understated, like all Acer gaming monitors, with just a few angular pieces of trim setting it apart from vanilla-looking business displays. A little red is added to the upright where it meets the base, which is a nicely finished piece of solid aluminum. The bezel is fairly wide by today’s standards and projects forward of the panel’s front layer. Anti-glare is effective and artifact-free.

On-screen display (OSD) controls are around the back right and consist of a power toggle, three buttons and a joystick. It’s easy to navigate the menus, but the joystick’s select function is a little difficult as it takes a focused press to make it work.

The large light hood that ships with the Nitro XV273K is completely rigid and held in place with screws, rather than snapped on. It’s better than many hoods we’ve seen shipped with expensive professional monitors. Unfortunately, it only works with Acer’s lug pattern, so you can’t use it on another display.

In addition, there’s an LED desk light that shines from the bottom of the monitor. It projects a soft glow at the panel’s base. You can control it in monitor’s System menu.

Ergonomic functions include a just-under four-inch height adjustment, along with 20 degrees swivel to either side, 25 degrees back tilt and 5 degrees forward. Movements are in keeping with a premium display and have no excess play or wobble. Once you get it to your liking, it will stay put. If you’d prefer to use your own bracket or monitor arm, Acer included a stout metal adapter with a 100mm VESA mount.

On the left side are two USB ports. They are matched by two more on the down-facing input panel. You also get two DisplayPort 1.4 and two HDMI 2.0 inputs. Why two DisplayPorts? Because connecting both to an appropriate graphics card will give you the full 10-bit signal depth for 3840x2160 resolution at 144Hz. If you use a single cable, the refresh rate is limited to 120Hz. Competing monitors, the Predator X27 and Predator XB273K, make do with a single DisplayPort connection; they reduce bandwidth to achieve full resolution at 144Hz.

The input panel also features a 3.5mm headphone jack or if you’d rather leave your ears open, there are two built-in speakers driven by 4-watt amplifiers. Sound is fair with decent volume and low distortion. There isn’t much in the way of bass, but detail is respectable.

The OSD is like that of other Acer monitors and reasonably easy to navigate. It’s divided into six sections, starting with basic image controls. The HDR option is of particular note. If you don’t turn it off for SDR signals, the Nitro XV273K kicks into an HDR simulated mode. This might work for some content, but in general it altered color and contrast unacceptably.

The HDR option also includes an HDR400 setting that boosted output to over 500 nits. That’s what we used during our testing. Another option to check on is Super Sharpness. Some picture modes will turn that on automatically, and it produces obvious ringing that only reduces clarity.

Speaking of picture modes, they are accessed by pressing a control key. You get eight presets, including the aforementioned HDR simulation. Making any change automatically puts the XV273K in User mode, like every other Acer monitor.

In the Color menu, you’ll find everything you need to calibrate SDR signals. There, you can choose from five gamma and four color temp presets, plus a user adjustment with gain and bias sliders.

On a second screen, you’ll find another picture mode selector, along with a color space option. That’s where you can access the sRGB gamut. Otherwise, you’ll see DCI-P3 color for all signals. The only drawback to the sRGB mode is you can’t adjust gamma or color temp, only brightness. There’s also a six-axis color adjustment for hue and saturation.

The Gaming menu has a two-level overdrive setting, along with aiming points, FreeSync toggle, fps counter and an option called VRB. Short for Visual Response Boost, it’s a blur-reduction feature that strobes the backlight. It works up to 144Hz but requires you turn off FreeSync and also reduces brightness to about 200 nits max.

If you want to enable a 144Hz refresh rate, you’ll need to connect two DisplayPort cables, then turn on the option in the second screen of the System menu.

Once you’ve set up the XV273K to your liking, you can save the settings to one of three memories. The option to reset to factory defaults is in the signal info screen.

Calibrating the XV273K is something of a compromise between color and grayscale accuracy. For SDR signals, one should use the sRGB color mode, but unfortunately, it has below-average grayscale tracking and can’t be calibrated. You can get a perfect white point in the User mode, but then you’ll have to use the full DCI-P3 color gamut for all signals, both SDR and HDR. The decision comes down to user preference. In HDR mode, all adjustments are locked out, but this is OK because accuracy is superb. In fact, it’s one of the best HDR monitors we’ve measured to date, as you’ll see on page four.

Here are our SDR settings. This is what we used, even though the color gamut was too large for SDR content.

We started by connecting the Nitro XV273K to our aging gaming PC with an AMD Radeon R9 285. That graphics card is woefully underpowered for a 4K monitor. HDR and high bitrates aside, it will only run games like Tomb Raider and Call of Duty: WWII at a measly 25-30 frames per second (fps), aka unplayable. But now, thanks to Nvidia’s new software implementation of G-Sync, it’s possible to run some FreeSync monitors with an Nvidia graphics card, like our Nvidia GeForce GTX 1080 Ti.

Besides an Nvidia 10-series card or better, you’ll also need version 417.71 (January 5, 2019) or better of the Nvidia Game Ready driver. We downloaded 419.35 dated March 5, 2019. Once this is installed, we simply turned on the FreeSync option in the Gaming menu, and the G-Sync option appeared in the Nvidia control panel. And work it does; we ran Nvidia’s G-Sync pendulum demo without issue.

Now for the caveat – this won’t work in HDR mode. If the monitor is connected to an Nvidia graphics card, engaging HDR in the Windows control panel grays out the FreeSync option in the OSD and deep-sixes G-Sync along with it. The only way to run adaptive sync and HDR simultaneously on this monitor is with a stout AMD graphics card and FreeSync. Note that FreeSync will not work when using the dual-cable connection for 144Hz. The highest refresh rate you’ll get with FreeSync is 120Hz.

Playing Tomb Raider gave us the chance to make a few comparisons. The game ran best when G-Sync was on. Since the game doesn’t support HDR anyway, we weren’t sacrificing any image quality. In fact, we were stunned by how sharp and detailed the environment looked. The benefit of high pixel density cannot be overstated. A 27-inch, 4K panel sports 163 ppi. That’s really dense, and it shows. The added color from its DCI-P3 gamut didn’t hurt either. Despite the monitor having an average contrast ratio, image depth was superb.

The best picture comes from HDR-specific games, like Call of Duty: WWII. This title makes maximum use of shadow and highlight detail, along with a huge color palette to take realism up a notch. Textures like brick, sand and rusty metal were felt as well as seen. Glistening sweat almost made us squint, thanks to the Nitro’s high brightness. While the effect isn’t as dramatic as that of a monitor with a full-array local dimming backlight, like the Predator X27, it was more impactful than playing the game in SDR mode.

We do wish there were some sort of dynamic contrast or backlight dimming option like the Predator XB273K has. That monitor’s contrast hits over 4,000:1 in HDR mode. However, the Nitro XV273K’s HDR mode is still an improvement over SDR. And it is one of the least expensive ways to game in 4K at speeds greater than 60 fps, which we had no trouble achieving on our G-Sync PC.

Windows also benefits from the HDR effect. Once enabled in the Control Panel, color and brightness amped up nicely. The desktop looked sharper and more detailed, especially when viewing small fonts and icons. Text-based apps, like spreadsheets and word processors, were a little easier to read, and photos looked rich and saturated. Performance seemed unaffected as windows opened closed and moved about smoothly with the refresh rate locked to 144Hz.