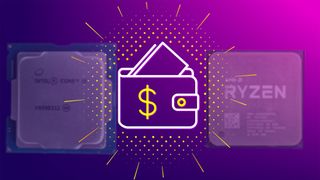 It's a good time to buy a cheap CPU. AMD's current Ryzen 3000 and Athlon processors (including the unlocked $49 Athlon 3000G) have shaken up the low-cost landscape. So now you can find quad-core models with gaming-capable integrated graphics for a mere $100, and the Athlon lineup now dips below 50 bucks. Intel's response has brought Hyper-threading to its low-end Pentium processors and two additional cores to the Core i3 line, which greatly improves performance for its budget chips even though they're still limited in terms of their graphics.

But supply issues price hikes have for several months made Intel's Pentium chips a tougher sell. AMD has taken advantage of this by introducing the Athlon 200GE, 220GE, 240GE, and the new 3000G. The 200-series chips are surprisingly capable at gaming even without a dedicated card. For more details about how the 200GE stacks up against Intel's comparable budget chip, see our feature AMD Athlon 200GE vs. Intel Pentium Gold G5400: Cheap CPU Showdown.

For those looking for something with a bit more gaming prowess without having to resort to a dedicated graphics card, we recently tested and reviewed AMD's Ryzen 5 3400G. It's a solid option, but doesn't offer a big performance boost over previous-generation chips like the Ryzen 5 2400G, which can still be found for around $115.

In an attempt to investigate Intel's latest mid-to-low-end processors, we recently tested the company's Core i3-9350KF. It performs well in gaming when paired with a dedicated graphics card, but with four cores and no Hyper-threading, the addition of Turbo Boost 2.0 isn't enough for us to recommend the CPU to anyone, really, at its current price above $175.

When choosing a CPU, consider the following:

For even more information, check out our CPU Buyer’s Guide, where we discuss how much you should spend for what you’re looking to do, and when cores matter more than high clock speeds. If you can expand your budget and buy a mainstream or high-end processor, check out our lists of Best CPUs for Gaming and Best CPUs for Applications. Below, you'll see our favorite budget picks.

Best cheap processors at a glance:

The Ryzen 3 3300X unlocks a new level of performance for budget gamers with four cores and eight threads that can push low- to mid-range graphics cards to their fullest. This new processor wields the Zen 2 architecture paired with the 7nm process to push performance to new heights while enabling new features for low-end processors, like access to the speedy PCIe 4.0 interface. The 3300X's four cores tick at a 3.8 GHz clock rate and boost to 4.3 GHz, providing snappy performance in lightly threaded applications, like games.

AMD includes a bundled Wraith Spire cooler with the processor. Still, you might consider budgeting in a better low-end cooler to unlock the full performance, particularly if you are overclocking. Speaking of which, the Ryzen 3 3300X can overclock to the highest all-core frequencies we've seen with a Ryzen 3000-series processor, making it a great chip for enthusiasts. Unlike AMD's other current-gen Ryzen 3 processors, you'll need to pair this processor with a discrete GPU, but the low price point leaves extra room in the budget for a more capable graphics card.

When money is tight, being able to game without a graphics card can lead to serious savings. And with RAM prices continuing to soar, those working with small budgets need to tighten the strings anywhere they can.

That makes the four-core, four-thread Ryzen 3 2200G particularly appealing for budget gaming builders and upgraders. The $99 chip delivers solid 720p performance thanks to its Vega on-chip graphics, decent CPU muscle for mainstream tasks, and can be dropped into an existing inexpensive 300-series motherboard (after a requisite BIOS update), to form the basis of a surprisingly capable low-cost PC. It’s also unlocked, so with proper cooling you can tune the graphics or the CPU to best suit your needs.

AMD's Athlon 240GE serves as the flagship of the company's budget lineup, but it still packs a convincing punch for low-end gaming systems. The integrated Radeon Vega 3 graphics facilitate playable frame rates at lower resolutions and quality settings, but the 3.5 GHz base clock is the only differentiating feature between the Athlon 240GE and its counterparts. Due to the unofficial support for overclocking, that means you can tune the Athlon 200GE to the same top performance as the more expensive chips, but at a $20 price savings.

If overclocking isn't in your plans, the Athlon 240GE is the best budget chip in its price band. Intel's competing Pentium lineup lacks the graphical horsepower to be serious contenders for the extreme low-end of the budget gaming market, but they are attractive if gaming isn't your primary goal. That is, of course, if you can find them.

AMD’s sub-$60 Zen-based Athlon is a good all-around value, thanks to its four computing threads and Vega 3 graphics that are capable of light gaming at lower resolutions and settings. Lightly threaded performance isn’t great, but when you’re spending this little on a CPU, you should expect compromises somewhere. And while it isn’t officially supported by AMD, if you have a compatible motherboard, this chip can be overclocked to eke out some extra CPU performance.

If your build budget can swing it, the $100 Ryzen 3 2200G is a much better chip with more cores and beefier graphics. But if you can only spend $60 or less on your CPU and you aren’t adding a dedicated graphics card, the Athlon 200GE is tough to beat. Intel’s competing Pentiums, the Gold G5400 and G4560, deliver better CPU performance. But they have higher MSRPs, and production shortages have made them hard to find unless you’re willing to spend close to $100 or more, making them incomparable in terms of budget CPUs.

You won't find many game titles that will play well at the popular 1920X1080 resolution on the sub-$80 chips, but there are a few. As we can see, AMD's $100 Ryzen 3 2200G is the undisputed king of the hill for 1080p gaming on integrated graphics, but the Athlon chips also push out playable frame rates in a few titles (if you're willing to tolerate lower graphics quality settings).

Switching over to 1280x720 finds the Athlon processors providing up to 50 FPS at stock settings and experiencing a decent performance boost from overclocking. Remember, all of the Athlon chips will benefit equally from overclocking, meaning the Athlon 200GE and 220GE will achieve the same level of performance as the overclocked Athlon 240GE. That's an amazing value for these low-cost chips. It should go without saying, but the Ryzen 3 2200G's Radeon Vega 8 graphics engine blows through the 1280x720 tests with ease.

Intel's Pentium lineup, and even the Core i3-8100 for that matter, struggle tremendously under the weight of these titles. Gaming at 1920x1080 is a painful experience: You won't find many games that are playable on Pentium processors at that resolution. Switching over to the 1280x720 resolution brings the Core i3-8100 and Pentium G5600 into acceptable territory, but those chips still can't match the Athlon's performance, not to mention the crazy good savings. Intel's Pentium G5400 is particularly disappointing, though, due to its pared-down UHD Graphics 610 engine. We wouldn't recommend this processor for gaming on integrated graphics.

But it's hard to recommend Pentium processors at all right now. Intel is struggling with a shortage of 14nm production capacity, so these chips are extremely hard to find, and when you do find them, they are subject to severe price gouging.

We focus primarily on integrated graphics gaming performance for ultra-budget chips, but these processors are also a great pairing with low-end discrete graphics cards. Below, we've tested the chips paired with an Nvidia GeForce GTX 2080 at the 1920x1080 resolution to remove any GPU limitations from our tests below. We tested with an Nvidia GeForce 1080 FE graphics card to remove graphics-imposed bottlenecks, but the difference between the processors will shrink with the cheaper graphics cards that are commonly found in budget builds. Provided the performance deltas are small, you can select less expensive models and enjoy nearly the same gaming experience with graphics cards on the lower-end of the GPU hierarchy.

Intel’s Coffee Lake Pentium models come with slight frequency improvements, a 3W increase in the TDP rating, and 4MB of L3 cache. These slight adjustments deliver a surprising boost to performance compared to the previous-gen Kaby Lake models. The Coffee Lake Pentium Gold G5600 even beats out the Kaby Lake Core i3-7100 in most of our gaming benchmarks, highlighting the impressive performance gains Intel made within a single generation.

The G5600 grapples with the Ryzen 3 2200G. The Ryzen 3 2200G is relatively simple to overclock with single-click options in the BIOS, and the bundled cooler provides enough headroom for all but the most extreme overclocking efforts. At stock settings, the 2200G trails the Intel Pentium Gold 5600, but the advantage of AMD’s unlocked multipliers is clear: At $99, the tuned Ryzen 3 2200G’s performance nearly matches the $117 Core i3-8100.

The Ryzen 3 2200G also comes with powerful integrated graphics that provide surprisingly strong gaming performance at lower resolutions and quality settings. That’s a feat the Core i3-8100 simply cannot match. If you’re seeking the absolute best gaming performance (when paired with a dedicated card) regardless of price, the Core i3-8100 fits the bill. If you want the most bang for your buck or plan on gaming on integrated graphics, the Ryzen 3 2200G is the clear value winner.

The Core i3-8100’s solid mixture of frequency and IPC throughput delivered to our expectations. The agile processor took the lead in several of our lightly-threaded applications, like the Adobe Cloud suite, but it is also surprisingly powerful in threaded workloads. The Intel Core i3-8100 also offers superior performance in applications that use AVX instructions, like HandBrake, which is a great addition to its impressively well-balanced repertoire. Much like we observed in our gaming tests, the Core i3-8100 offers the best overall performance.

Even after overclocking, the AMD Ryzen 3 1300X isn’t competitive enough with the Core i3-8100 to justify its higher price tag, and the lack of integrated graphics also restricts its appeal.

The Ryzen 3 2200G continues to impress with its lower price point and competitive performance, not to mention the integrated Vega graphics, making it the obvious choice for budget builders who are willing to spend a little extra time on tuning.