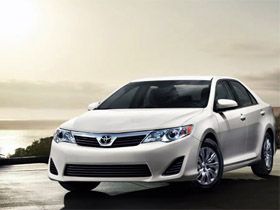 Toyota Motor Corporation has been around since 1937 in Japan, and the U.S. operation was founded in 1957. Unlike the Hyundai and Kia vehicles we previously evaluated, there are no origin stories here that have anything to do with Ford. The company surpassed General Motors as the largest global manufacturer of automobiles in 2008, and managed to hold that title up until last year. Due to the earthquakes in Japan and floods in Thailand, Toyota slipped to number three behind Volkswagen and GM.

Today, it’s hard to speak of Toyota without some mention of hybrid technology or its Camry, which currently holds 51% of the mid-size sedan market, and is one of the best-selling cars in the U.S. Although our inner enthusiast is sad to see the company that once brought us beautiful sports cars like the 2000GT, Supra, and Celica focus on more general-purpose sedans, it'd be hard to deny that Toyota is the poster child for eco-friendly hybrid vehicles with a complete line-up from the Prius to SUVs.

What happens, then, when you combine the best-selling car in America with a hybrid powertrain? We're taking a break from benchmarking graphics cards to find out what Toyota's 2012 Camry Hybrid XLE and its infotainment system has to offer.

We acquired our test mule with the Leather Package, Toyota’s mid-level Display Audio with Navigation and Entune 6.1-inch touchscreen infotainment system, push-button start, and the Blind Spot Monitor and Safety Connect features. We chose the Camry Hybrid XLE over a Prius because it’s a mid-size sedan, which is the automotive equivalent of a GeForce GTX 660 or Radeon HD 7850, a bread and butter product that faces stiff competition, but is responsible for big volume. Every non-luxury automotive manufacturer competes in this class with its own take on what American families want. We see some companies focus on the latest tech goodies, while others emphasize maximum interior volume, evolutionary tweaks that don't rock the boat, or perhaps even more aggressive styling cues to turn heads.

The seventh-generation (XV50) Camry is supposed to be Toyota's best representation of this family since the first front-wheel drive Camry rolled off the assembly line in 1982 for the '83 model year.

Although the North American XV50 Camry is available in a number of trims, including a 2.5-liter inline-four and 3.5-liter V6, drivers in Toyota’s domestic market (Japan) only have the hybrid powertrain available to them.

Today we decide if the 2012 Toyota Camry Hybrid XLE is worthy of Tom's Hardware's tech-lust, or if it's simply the Japanese equivalent of your grandfather's Buick.