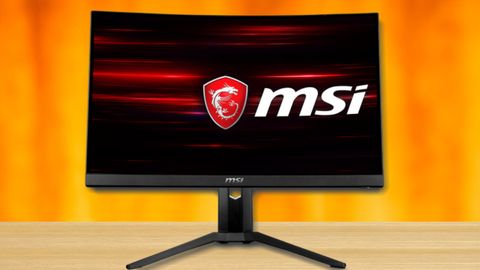 Though the MSI Optix MAG271CQR has a couple of image accuracy issues, its superior gaming performance, speed and rich, saturated color outweigh those flaws. It provides a fantastic experience and an excellent price/performance ratio.

When narrowing your best gaming monitor prospects, speed is usually the top priority. But with screens with 144 Hz refresh rates becoming increasingly common, that list can become crowded with confusing choices.

The next logical thing to consider is image quality. Color accuracy is certainly important, but the key to everything is contrast. That’s why we’ve long touted VA panels over IPS and TN ones. Short of a high-end display with a full-array local-dimming backlight, there is no greater dynamic range than that found in most VA monitors available today. By far, VA offers the most bang for the buck when it comes to contrast and color saturation.

The MSI Optix MAG271CQR ($375 / ~ £363 with VAT at the time of publishing)  answers the call for speed and contrast with a VA panel and 144 Hz. It’s a 27-inch panel with QHD resolution, 1800R curvature, plus AMD FreeSync, as well as the ability to run Nvidia G-Sync unofficially. It even checks the styling box with RGB lighting across the back.

Unpacking the ample carton reveals a lightweight screen that tips the scales at a little over 12 pounds. The panel, upright and base must be assembled, but that can be done without tools. After hooking the panel on the upright’s mounting plate, two thumbscrews secure it in place. The base attaches with a captive bolt. The cable compliment includes USB 2.0, HDMI, DisplayPort and an IEC cord for the internal power supply.

Despite its light weight, the MAG271CQR is solidly built with little flex in any of the hardware. The base is slender and cast from solid aluminum with a matte black finish, and the upright has a brushed texture molded into its plastic cover. Surrounding the screen are narrow bezels around its top and sides and a wider plastic strip at the bottom. An anti-glare layer provides excellent picture quality in all indoor environments without any obvious grain or distortion. Though the curve radius is a tight 1800mm, the image is free from any barrel distortion, where lines curve inward, or pincushion effects, where straight lines curve outward. Wraparound is subtle, but you will feel a tad more immersed than with a flat screen of the same size.

Around back is a slick RGB lighting strip sweeping across at a stylish angle. You can turn it on or off in the on-screen display (OSD), but for further effects, you’ll have to download MSI’s Mystic Light app, which operates from either a PC or a smartphone. The lighting syncs with compatible hardware, like mice (see our best gaming mouse article), as well as the best gaming keyboards and headphones. Speaking of headphones, you can hang yours (for help finding one, see our Best Gaming Headsets page) on a cool hook that pops out from the left side of the bezel.

For ergonomics there’s a 5.1-inch height adjustment and 20-degree back tilt with 5-degree forward. Oddly, there is no swivel available; you have to slide the base to turn the screen.

Video inputs comprise two HDMI 2.0 ports, plus a single DisplayPort 1.3. You’ll need to use the latter for G-Sync, but FreeSync works through all inputs. For audio, there’s a 3.5mm headphone jack but no built-in speakers. USB 2.0 comes in the form of one upstream and two downstream ports.

For the best gaming experience, we recommend using the settings pictured above.

The OSD is controlled with a tiny joystick around the back on the right. When clicked in a direction, it brings up quick menus that can be programmed by the user, like input selection, gaming timer and image mode. A press reveals the full menu, with many gaming-oriented features.

First up are five picture modes. User is the default and delivers the best and most accurate image. The others alter color temperature and gamma to suit different gaming categories. Black Tuner adjusts shadow detail, but its adjustments are very coarse. One click in either direction renders the image either very dark or very washed out. We recommend leaving it on the default setting of 9.

Response Time (overdrive) has three levels with the middle one (Fast) striking the best balance between blur reduction and ghosting. The Anti-Motion Blur feature is a backlight strobe that smooths out what little blur exists but reduces brightness by 60%. It works even if FreeSync is on, but not with Zero Latency, which reduces input lag by 4ms, according to our tests. We turned off Anti-Motion Blur for all our gameplay tests.

You’ll want to activate adaptive sync regardless of the brand of your graphics card because the MAG271CQR work with G-Sync, even though Nvidia hasn’t certified it to do so. We tested it with an Nvidia GeForce GTX 1080 Ti FE graphics card without trouble. For more information on this process, check out our article on How to Run G-Sync on a FreeSync Monitor. For even more information on the state of adaptive sync, check out Nvidia G-Sync vs. AMD FreeSync: Which Monitors Perform Better?

Two other cool features in the Gaming menu are an array of aiming points and a frame counter. MSI calls this one “Refresh Rate” for some reason, but it is nothing more than an fps (frames per second) meter that can live in any corner of the screen.

Calibration is possible with the controls found in the Image menu. There are three color temp presets, plus a Customization mode that unlocks RGB sliders. We opted for the Normal preset, as it provides the best possible accuracy. There are no gamma options, so you’ll have to accept the luminance curve that MSI has provided.

The rest of the OSD contains necessary functions like input selection, PIP and PBP options and a sub-menu that set the functions of the joystick.

There is no separate signal info screen, but at the top of the OSD, you can always see the input resolution, refresh rate, game mode, status of the Zero Latency switch and active input. The Setting menu also has an option for resetting things to their factory defaults.

The default User mode measures well, with excellent grayscale tracking and very good color, with a twist. The MAG271CQR is listed as supporting the sRGB color gamut, but we’d call it more sRGB+, with the plus pointing to extra saturation as you near the perimeter of the gamut triangle. You get accurate color for most of the saturation range and some extra punch in the brightest content. The MAG271CQR doesn’t have a standard sRGB mode, so if you’re looking for a color-critical display, this isn’t it.

When calibrating the MAG271CQR, we discovered its Custom color temp mode reduces brightness by almost half and skews gamma unacceptably. We achieved good grayscale tracking, but the losses outweighed the gain. In the end, we left the color temp on Normal and reduced brightness to 200 nits. Gamma is still off the mark, but overall quality is good.

Here are our recommended settings:

To see if the MAG271CQR’s 1800R curvature introduced any image distortion with small text, we opened Microsoft Word and Google Chrome. We didn’t see any issues. In fact, the curve was barely noticeable. Some may wonder if there’s any advantage to a curved monitor with a 16:9 aspect ratio. We found that for productivity it made no difference, but for gaming and video, there was a subtle wraparound effect that enhanced the experience. Of course, an ultra-wide makes more of the curved technology.

In Call of Duty: WWII,  the pumped-up red primary and excellent contrast had a positive effect. We were immediately struck by the bold reds and ruddy flesh-tones of the characters. Breaking through enemy lines on a sunny day is a very colorful experience, accentuated by instant control response and super-smooth, blur-free video processing.

With FreeSync on, our PC running an AMD Radeon R9 285 graphics card enjoyed frame rates around the 60 fps mark, with detail set one notch below the max. Action was artifact-free with no tearing or hesitation. Obviously, higher refresh rates will provide smoother motion and faster response, but the game was perfectly playable on our legacy PC.

We also played the same title with G-Sync and a 1080 Ti FE. With overdrive set to its middle option (Fast), we saw no blur and no ghosting. Judder was also non-existent as frame rates hovered between 100 and 110 fps without tears. It’s hard to imagine a better gaming experience.

Equally mesmerizing was Tomb Raider, which maintained speeds of 130-140 fps at the highest detail level with G-Sync. QHD monitors can keep the refresh rate high even without  a premium graphics card, a real advantage over 4K gaming monitors. Again, we were impressed by Tomb Raider’s color. Reds were vivid without being overblown. Shadow detail was strong with deep blacks and contrast only a VA screen can provide. The only way to top this is with a zone dimming display, which would cost at least five times more than the MAG271CQR.