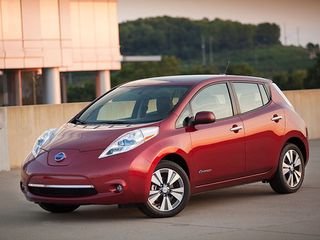 Nissan made a massive gamble in 2010 when it rolled out its first pure electric, the Leaf, for the 2011 model year. All-electric vehicles weren’t necessarily new at the time; we saw a couple of failed experiments a decade prior with the GM/Saturn EV1, Toyota's RAV4 EVs and various EV concepts. Tesla had its Roadster available at the time, too. However, Nissan’s risk wasn't introducing an EV. Rather, the gamble was making the Leaf available all around the world - not just California. This was the first real push for EVs from a major automaker.

The same company that produces the GT-R, which guzzles gas, was also building a mass-market EV to occupy the opposite end of the automotive spectrum. Crazy, right? But Nissan didn’t give up and now the Leaf is in its fourth model year with over 100,000 vehicles on the road.

That figure doesn't sound particularly impressive compared to the number of internal combustion engine vehicles that move off lots, but it's certainly respectable for the first nationally available EV. Think of it as the people's electric car, bringing affordable battery power to the masses.

Before Nissan's Leaf, I had never driven a pure electric vehicle, and never had to deal with range anxiety. I’m a car enthusiast at heart, with a true affinity for manual transmissions. In fact, our Tom’s Hardware project car is my personal 2014 Mazda 5 Sport with a six-speed manual. EVs are foreign territory for me. Still, I'm willing to give them a shot. Nissan's 2015 Leaf SL isn't a bad place to start. Our press car includes the premium package, carrying an MSRP of $37,540.

Without question, the Leaf's exterior isn't as attractive as the Tesla Model S. Some might even call it ugly. But the design is functional. The front end is reminiscent of a Bulborb from Nintendo’s Pikmin series (or a Bulbasaur from Pokemon, according to my wife). Still, Nissan managed to make the Leaf quite slippery with a drag coefficient of 0.28. That's respectable, considering early versions of the GT-R had a CD of 0.27. Drag is particularly important in the world of EVs. The more aerodynamic they are, the more range you might expect.

The bulbous headlights serve an aerodynamic purpose, directing air away from the side mirrors. This also reduces wind noise, keeping the cabin quieter. I'd say it works - Nissan's Leaf is eerily quiet inside at highway speeds. Most of the car's underside is also covered to minimize drag.

Around back is the Leaf’s more attractive angle; it has a normal-looking hatchback rear end that’s furnished with large Volvo-esque taillights and finished with a rear diffuser. As Meghan Trainor puts it, it’s all about that bass…

Overall I don’t mind the Leaf's looks. The three zero-emissions badges are a little excessive, but you can pull those off with a heat gun and dental floss. I only wish Nissan hadn't gone with chrome door handles. They're major finger print magnets on the most-touched part of the car's exterior.