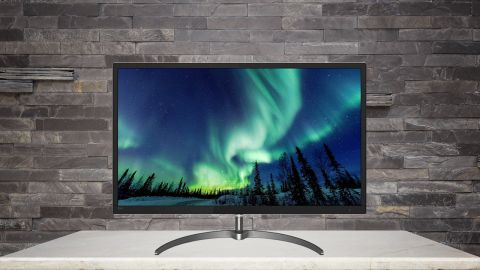 The Philips 326E8F leaves out a few non-essentials, like USB ports, speakers and a fancy stand. But it delivers bold and accurate color, excellent contrast and smooth video processing via FreeSync and 75Hz. Breaking price barriers for 32-inch screens, it’s definitely worth a serious look.

There’s no question that gaming on a large screen is more fun than gaming on a small one. Ultra-wides and jumbo monitors provide a sense of immersion that can rival even the best VR goggles. But most big-screen monitors carry premium prices, putting them out of reach for many. Our recent HP Omen X 65 Emperium review certainly proves that. Clearly, there is a gap in the market for reasonably priced large screens.

So if you’re looking for something more attainable, Philips has the monitor for you: the 32-inch 326E8FJSB. With a price at the time of writing of $280 / £215.99, you’ll have to forgo things like built-in speakers and USB ports,. But it’s a VA panel with a high contrast ratio, plus accurate color, FreeSync and a 75Hz refresh rate.

When a monitor comes with a VA panel, it’s already up on the competition. That technology’s higher contrast makes it clearly superior to IPS and TN in the image depth department. In general, you can easily see the difference when viewing them side-by-side. VA’s lower black levels have a significant impact on picture quality and color saturation.

The 326E8FJSB starts with a QHD resolution panel (2560x1440 pixels) and adds FreeSync adaptive refresh in an operating range of 48-75Hz. While that is not a huge uptick from 60Hz, it is enough to quicken panel response and lower input lag by a visible amount.

To keep the price low, Philips left out USB ports, built-in speakers and a fancy stand. There’s also no blur-reduction, but that is a rarity among FreeSync monitors. At QHD resolution, the issue of FreeSync below 48Hz is non-existent. Even a budget graphics card can keep the framerates above that number in most of today’s popular games.

Philips did not skimp on color though. Bandwidth is 10-bits, and we found a little bonus saturation during our measurements. It didn’t stray too far from the sRGB/Rec.709 spec, but the 326E8F is a bit more vivid than most sRGB screens we’ve seen. It looks like a winning package at a low price. Let’s take a look.

Once you extract the 326E8FJSB panel and its base from the crumbly foam, assembly is achieved by mating the two parts together with a captive bolt. The upright is already attached, so you’ll have to remove it before using third-party hardware for mounting with the four 100mm VESA lugs.

Cables include VGA and HDMI only; there is no DisplayPort. The power supply is internal, so the monitor comes with an IEC cord too.

Styling is definitely minimalist with simple black trim and a shiny plastic cover across the back. The bezel is neither overly wide nor thin and makes no effort to hide itself. The screen’s anti-glare layer is fixed tightly for clarity and is free from artifacts or grain. A small Philips logo adorns a clear, plastic tab at the bottom center. The only other feature is a tiny white power LED at the lower right.

You won’t immediately locate the on-screen display (OSD) controls as they’re not in any of the usual places. A bit of feeling around revealed a tiny joystick at the bottom-center. It handles all functions, including power, and works very well. We were able to quickly navigate the excellent OSD and access all the 326E8F’s features with ease.

The side profile is relatively slim with a bulge across the bottom. The stand’s fulcrum is low, so as you tilt the screen back, the top moves away from you while the bottom stays put. Total adjustment is 20 degrees back and 5 degrees forward. There is no swivel or height adjustment. Movements are firm with little play. The package is fairly light, so there is a bit of wobble, but overall build quality is quite good for the price.

The input panel includes one each of HDMI 1.4, DisplayPort 1.2, DVI and VGA. You also get a 3.5mm jack for headphones or powered speakers, and you can control volume with the OSD if desired.

The joystick controller is very effective at its job. A left-click opens the SmartImage menu (picture modes), up is input selection, right is the full OSD and down produces a volume slider. A long press turns the monitor off.

There are six preset image modes in addition to the default Off setting. Off is the best one to choose, as it is quite accurate out of the box and still allows access to all image adjustments. In addition to five gamma presets, you get color temp modes by Kelvin value, an sRGB preset and user-adjustable RGB sliders. We chose the latter to dial in our sample to a high standard.

There’s also a three-level overdrive control feature called SmartResponse. The medium setting here, Faster, it the best choice for low blur and no ghosting. FreeSync is automatically on when an AMD graphics card is detected, so no user intervention is required there. And you won’t have to engage an overclock for 75Hz either; the option appears in Windows’ refresh rate choices.

Out of the box, the 326E8FJSB has SmartImage turned off and the 6500K color temp selected, and it’s fairly accurate.

For an even better image, choose the User color temp and set the RGB sliders to our recommended values below. We also found more depth by selecting the 2.4 gamma preset, which improved highlight detail and added contrast to the mid-tones. Our full recommended settings are below:

We spent quite a bit of time with both Tomb Raider and Call of Duty: WWII. Playing at QHD resolution didn’t really sacrifice much detail, even though we’ve become spoiled by premium screens, like the Asus ROG Swift PG27UQ and Acer Predator X27 (both are 4K resolution). At 32 inches, the extra size is certainly appreciated. Even though pixel density is 93 pixels per inch (ppi), we still saw realistic sweat, dirt and textures with enough depth to be visceral. The high contrast ratio is a huge plus. Only an HDR monitor can deliver more depth than a good VA screen like the 326E8FJSB.

Both games easily pegged the frame counter at 75 frames per second (fps) when we played on our Nvidia GeForce GTX 1080 Ti-equipped PC. Even without FreeSync in play, there was no tearing.

With our more modest AMD Radeon R9 285-based rig, the action still managed to hover in the 60 fps range. FreeSync was welcomed, as it prevented any tearing artifacts. Motion blur was also easily kept in check. You’ll want to use the Faster, rather than the Fastest, overdrive (SmartImage on this monitor) setting. Fastest produced significant ghosting, which we saw prominently in Call of Duty: WWII.

Input lag wasn’t an issue either; we never noticed a single delay or stutter. While the very best players may want a higher refresh rate, 75Hz is fine for most who play casually. We especially enjoyed the rich and saturated color afforded by that slightly-larger-than-sRGB gamut.

Working in Windows revealed a bit of pixelation in the smallest screen fonts. Black text on a white background looked fine mostly, unless the letters were very tiny. If you really want the finest detail possible for spreadsheets or word processing, only a 4K monitor no larger than 32 inches will do. Our review focus’ 93ppi meant good graphic detail in photos and video content, plus the strong contrast helps.

Next Page Brightness and Contrast
Be In the Know