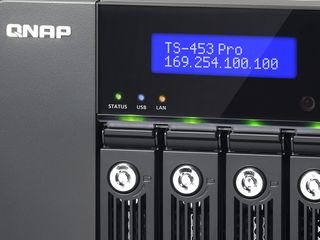 QNAP is a key player in the network-attached storage market. A while ago, the company introduced its TS-x53 line. Unlike the TS-x51, which centers around Intel’s dual-core Celeron J1800 CPU, the TS-x53 line utilizes the J1900 with four cores. The more powerful host processor is also equipped with 2MB of L2 cache, whereas the J1800 only has 1MB. In order to maintain a reasonable TDP, the J1900 operates at a lower clock rate. Still, the two additional cores offer better performance overall.

The TS-453 Pro-8G we're evaluating today comes with not only with a quad-core CPU, but also 8GB of DDR3 RAM. That gives it a huge advantage over other NAS servers equipped with 2 or 4GB.

Without a doubt, the major advantage of QNAP products is their QTS operating system, which is based on Linux and offers an intuitive, yet powerful interface that allows even inexperienced users to fully exploit the capabilities of the server. In addition, the TS-453 Pro supports the QNAP virtualized Personal Computer (QvPC) technology, which transforms the NAS into a fully usable PC. If you plug a monitor into the available HDMI port, along with a keyboard and mouse, you can operate the NAS through its "HybridDesk Station" application. In addition, QvPC features include Virtual Machine (VM) integration, multimedia transcoding, cloud integration and various other NAS connection technologies.

Obviously, network-attached storage isn't the best way to describe devices like the TS-453 Pro nowadays, since these servers provide much more functionality than simply adding networked storage space. For years now, companies like QNAP have equipped their NAS products with tons of features. Today, there is almost nothing that a modern NAS cannot do, at least as far as networking functions go.

The TS-453 Pro-8G's increased memory capacity, along with native support for Intel’s Virtualization Technology (VT-x), makes it ideal for QNAP’s Virtualization Station, through which the unit is transformed to a virtual platform supporting multiple operating systems. Another interesting feature that home users will likely appreciate is the server's HD video transcoding capability, which even covers 4K content.

Finally, the TS-453 Pro is compatible with QNAP's UX-800P and UX-500P expansion enclosures, which allow a total of 12 and nine HDDs, respectively (NAS + enclosure disks combined).

Again, the TS-453 uses an Intel Bay Trail-D-based Celeron J1900 with four cores and 2MB of L2 cache. The base clock rate is 2GHz, though Turbo Boost can take lightly threaded workloads up to 2.41GHz. A low 10W TDP makes passive cooling possible, which helps reduce noise and increase reliability by minimizing the number of components with moving parts. The J1900 is manufactured using 22nm lithography, and contrary to the Rangeley CPU family that other NAS manufacturers leverage, it doesn’t support AES-NI.

The normal TS-453 Pro comes with 2GB of DDR3 RAM, while the TS-453 Pro-8G model includes 8GB to improve performance in intense usage scenarios. As far as storage goes, the unit can take up to four hard drives, so if you use 6TB disks, that's up to 24TB before formatting. All popular RAID configurations are supported, along with iSCSI. Briefly, that's a storage area network service enabling access to consolidated block-level data storage. To put this as simply as possible, iSCSI lets you "see" a remote storage location as a local one through your workstation, which makes expanding any system's storage space a simple task.

In the networking section, we get four GbE ports. Other I/O includes three USB 3.0 ports, one of which is located conveniently on the front of the NAS; two USB 2.0 ports; and an HDMI output. The only significant omission is eSATA, though you can achieve external expansion just as easily through USB 3.0.

The NAS' dimensions are defined by the amount of space that the four hard drives take up. It's a compact enough unit, considering that the TS-453 Pro uses a fairly beefy internal Delta PSU, and not an external brick. Cooling is handled by one 120mm ball-bearing fan. It should be a reliable unit, not just because of its bearings, but also due to the low rotational speeds QNAP uses.

Although the almost-$1000 price tag looks intimidating, remember that this is an SMB-oriented NAS, so it's intended for customers who prioritize performance and reliability over cost. A NAS appliance typically operates continuously; under those conditions, two years of use exceed the normal utilization of a typical PC.

Next Page Packaging, Contents And Exterior
Topics
NAS / RAID
Qnap
Storage
22 Comments Comment from the forums
Be In the Know