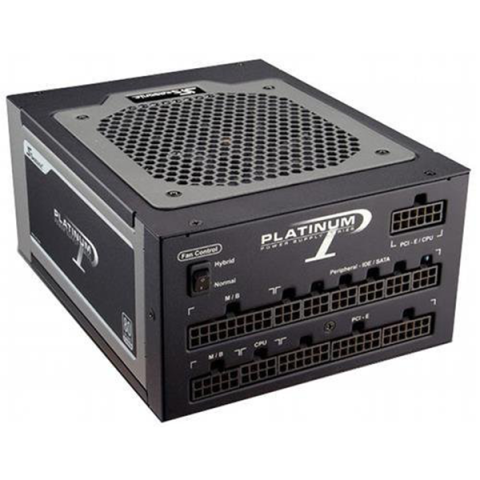 The SeaSonic Platinum-760 is a high quality, fully modular PSU that stands out ahead of its high-efficiency, mid-range competition. While slightly louder than Corsair's HX750i when set to automatic mode, the unit's manual Hybrid mode is completely silent at anything under 600W.

SeaSonic renamed its renowned X series to the Platinum family. These are the company's high-end power supplies, all of them sporting Platinum-rated efficiency and output up to 1200W. Some of the lower-wattage models are even fan-less.

The Platinum-760 is a mid-range member of the series, unsurprisingly sustaining up to 760W. Typical of SeaSonic, the PSU sports hybrid fan control, which can be turned on or off by means of a switch. In Normal mode, the fan runs continuously, whereas it runs only when needed in Hybrid mode.

This 760W power supply's workmanship is impeccable, similar to the other Platinum-class contenders we've already looked at. In the same vein, neither the fully modular cabling approach nor the single-rail design surprise us. Expect the +12V rail to deliver up to 63A.

Most of SeaSonic's cables are flat; only the motherboard cable is sleeved and round. The number of connectors you get is comparable to FSP's offering, though the Platinum-760 sports an additional CPU and SATA connector. But they're all slightly shorter than what FSP provides.

Like most of SeaSonic's high-end PSUs, the SS-760XP2 has a seven-year warranty.

Once again, the 80 PLUS Platinum specification poses a formidable challenge. Like Corsair's previously-reviewed submission, the SeaSonic Platinum-760 struggles to meet its efficiency requirement at a 50% load. However, a 91.73% measurement is close enough to 92%. As with Corsair and FSP, we're not going to make a big deal out of this.

At 100% and 20% load, the SS-760XP2 easily satisfies Platinum's requirements. But at very low loads, it is less efficient than FSP's Aurum 92+. SeaSonic's higher output rating may be partly to blame.

SeaSonic PSUs are renowned for excellent ripple and noise numbers, and the SS-760XP2 is no exception. Low ripple voltages on all power rails and a nice-looking scope picture are an indication of excellent electrical quality.

The Platinum-760 passes all other tests with aplomb. At 110V, its stand-by power is the lowest of all three PSUs, and its hold-up time is the longest (at least at 230V).

When we measured the sound level, we recorded results we liked and others we didn’t. In hybrid mode, the fan doesn’t even turn on during our 50 and 200W tests. However, when it does turn on (at 600W in our case), it was louder than expected. Mostly, its sound level is 34.1 dB(A), which is still barely acceptable. But sometimes the fan speed revs up briefly, which results in a sound level of 40 dB(A). That's less than acceptable. Thus, if you draw more than 600W from this PSU, we recommend turning the hybrid mode off to prevent its fan from revving up.

Compared to FSP's Aurum 92+, the SeaSonic PCB is densely populated. The Platinum-760 sports a modern design, including a full-bridge topology, LLC converter and DC-DC technology. SeaSonic sources all of its parts from top-quality manufacturers. The primary capacitor is made by Hitachi, while the secondary-side capacitors are manufactured by Rubycon and Nippon Chemi-Con. Unsurprisingly, the soldering quality is excellent.

SeaSonic’s top-end models come with a seven-year warranty, excellent workmanship and superb electrical quality. The Platinum-760, the highest-output PSU in our three-way comparison, is no exception. From a feature set perspective, this PSU lands in the middle between FSP's and Corsair's products, albeit quite a bit behind the HX750i. That doesn't mean the Platinum-760 is lacking, though.

As for efficiency, SeaSonic almost reaches Corsair’s levels. And its ripple and noise values are excellent, beating the other two PSUs. Electrical quality and PCB design are excellent. With all that in mind, why is this model not the clear winner, sharing its top finish with Corsair's HX750i? Although is sports hybrid fan control that can be enabled with a switch, its fan is slightly louder than Corsair's, knocking it  back from a definitive victory.