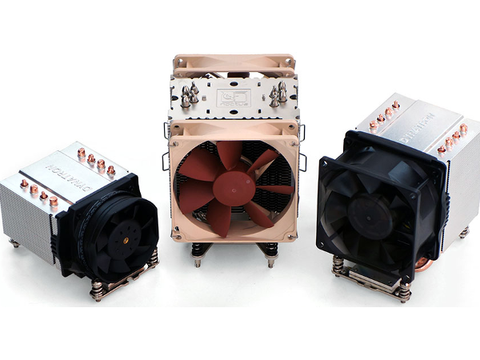 With a similar weight and more tightly spaced fins to provide similar surface area, we really expected the Dynatron R27 to provide similar cooling performance compared to the NH-U9DX i4. The Noctua has two slightly larger fans, but these operate slowly, and Dynatron attempts to make up the difference by using a thicker, higher-pressure fan. Unfortunately, the combination of tight fins and a high-pressure fan didn’t give it the desired level of cooling performance.

The tiny R24 even had lower temperatures than the R27, though not by much. Had the goal of this review been to find something for the server room, I could have called the R24 the best 2U cooler for Narrow ILM, but it’s just too noisy for consumer PCs. Any attempt to balance cooling to noise via fan speed modulation failed, as the cooler ignored the PWM signal and went full force any time the CPU got warm. It could be useful in a home media server in the basement, but that’s usually a place where space is no longer a concern.