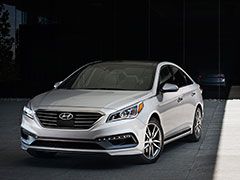 Hyundai is keeping busy with product updates. Fewer than four months after we attended the press launch for its 2015 Genesis Sedan, Hyundai is at it again with an all-new Sonata. The company invited us to Montgomery, Alabama to experience the Sonata first-hand. Now, you might be wondering why Hyundai chose Montgomery, out of all the places to launch an update to its bread-and-butter sedan. But the answer is easy: Hyundai manufactures the new Sonata and Elantra in Alabama, so it was a great time for journalists to tour the factory and drive its cars right off of the assembly line.

The new Sonata has very big shoes to fill, as the sixth-gen YF Sonata marked the most dramatic styling direction change in Hyundai history. While the fifth-gen NF Sonata was engineered as a perfect focus group car, the YF went in another direction, featuring a bolder design and optional turbocharged power. That was a first in a segment that typically relies on larger-displacement V6s at the top-end.

This time around, Hyundai aims to refine the Sonata with more comfort, quietness, smoothness and a taste of the technology available in its luxury brethren. Since Hyundai promised that the new Sonata will be one of the first vehicles to support Apple Car Play, we couldn’t resist spending some time with it.

Hyundai employs its fluidic sculpture 2.0 design language, which first debuted in 2013 on the Santa Fe Sport and was further refined with the 2015 Genesis sedan, giving the Sonata its familiar corporate face. A large upside-down trapezoid grille imparts a familiar yet distinct face. Standard LED daytime running lights adorn the lower front fascia at the expense of driving/fog lights and look more premium to my eyes.

The side profile loses the upsweeping line that integrated the door handle on the previous-gen Sonata. Instead, Hyundai softens the side profile a little with a simple straight line. The Sport and Limited trims receive added chrome rocker panels that I find excessive and cheesy, with chrome door handles to match.

Around back, you’ll find LED tail lights on the Limited and Sport 2.0t trims that look quite nice lit up. All Sonata trim levels receive a small trunk lip spoiler that remind me of 90s vehicle design, which I'm not a big fan of.

Overall, the new Sonata has distinct looks, but remains conservative compared to its previous generation. Hyundai might be onto something there, though. Personally, when I first saw the 2013 Ford Fusion, I thought it was a stunning vehicle that made a bold styling statement. I thought the old Sonata was a good-looking car too. But after seeing enough of them, I don’t find the boldness of the Fusion or the aggressiveness of that old Sonata as attractive anymore. And I still find the cleaner Peter Schreyer-designed Kia Optima nice to look at, even though it's been around since 2011. To me, clean and conservative ages better than bold and aggressive.