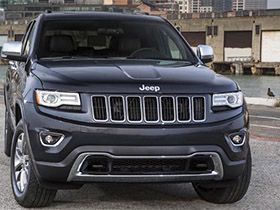 Before the United States Military had the Hummer H1 as its vehicle of choice, there was the Willys Jeep. That brand remains iconic in America, having proven itself in World War II and earning a reputation for excellent off-road prowess. Of course, ownership of the Jeep name has changed hands multiple times. Previously, you have Willys-Overland, Kaiser-Jeep, AMC (American Motors Corporation), and its current owner, Chrysler. There was that sleazy affair that Jeep’s parent company had with Daimler in the late '90s to 2000s that introduced us to the poorly-conceived Compass. But that's an era we'd rather scrub from our memories. Fortunately, Chrysler’s Italian sugar-daddy is doing a great job turning the company around and revamping its product line-up.

And that brings us to the focus of today's article: the latest and greatest 2014 Jeep Grand Cherokee Overland 4x4. We drove the Grand Cherokee during NWAPA Mudfest 2013 (Mudfest 2013: Tom's Hardware Helps Test 23 SUVs) and decided that the SUV (along with its Uconnect Access system) deserved a closer look. We booked it for a week of on-pavement and light off-roading antics.

The 2014 Grand Cherokee offers a host of styling changes that soften its exterior to look more luxurious. The headlights are smaller and feature LED running lights, the front and rear fascia receive several subtle tweaks, there’s added chrome on the tail lights, and you'll find a paint-matched seven-slot grille with chrome inserts. I’m usually not a fan of chrome work, but our test platform pulls it off deftly.

The fresh styling pays homage to Jeep’s history, too. Each headlight has a little detail that recognizes the company’s roots and history. The driver's side lamp states matter-of-factly “Since 1941,” a tribute to the first year Jeeps were manufactured. Look closely on the passenger-side light and you'll find a silhouette of the original Willys Jeep. If you're not an enthusiast, you'll probably overlook those subtleties. But they remind us that Jeep's Grand Cherokee still has the spirit of its predecessors, despite refinements make it more comfortable for grocery trips, rather than running recon on the battlefield.

Next Page Chrysler's Uconnect Infotainment System: Better Than Before
51 Comments Comment from the forums