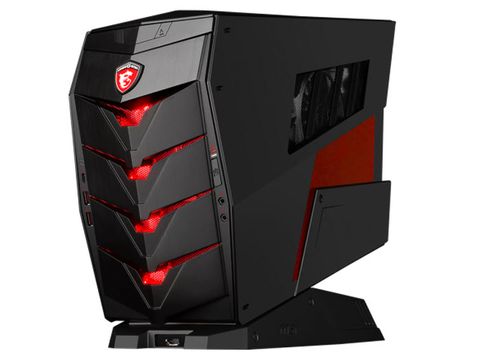 Supporting CPUs up to the Core i7-6700K and graphics up to the GTX 1080, MSI’s Aegis X could be an ideal companion for the gamer who values compactness and portability over overclocking capability.

Though most PC hobbyists prefer to start from scratch, it’s hard to overlook the special features that manufacturers can enable by designing several parts as a complete package. The term “Barebones” refers to a motherboard with case and power supply, but these can be bundled either by the manufacturer as a custom unit or by a reseller using off-the-shelf parts. Even low-end ATX full towers are sometimes sold as Barebones kits. Finding a base configuration with special integrated features requires one to look beyond the term Barebones and into manufactured solutions.

Most of these custom designs use several standard form factor components to assure buyers that non-original replacement parts will fit, even if doing so sacrifices those custom features. Creative’s full-ATX Sound Blaster PC represents my first exposure to a manufacturer-optimized Barebones with its built-in Live Drive. Owners who wanted to replace the Slot 1 motherboard formed communities to figure out how to make its modified Live Drive cable work with the header found on Creative’s Sound Blaster Live discrete audio cards. Creative’s motherboard supplier saw the problem of stranded customers as an opportunity to sell an entire set of components at every minor upgrade, dropped out of the motherboard business, and switched its entire product line to propriety "mini barebones" PCs. Meanwhile, manufacturers who have remained in the motherboard business continue to offer their Barebones customers an easier upgrade path, at least most of the time.

MSI’s Aegis X for example is based on Mini ITX. Any of its components can be replaced with parts from other brands, though, as with the customized Live Drive mentioned above, doing so could force buyers to give up a couple features. The Type-C USB 3.1 10 Gbps port is primary of the two custom features since it uses a PCIe interface over a data cable to connect the daughter card upon which that port is mounted.

Highlighted by the backlit logo, a button that triggers a firmware function otherwise known as MSI OC Genie is the system's remaining proprietary feature. On the Aegis X it’s called “OC Mode” for “MSI Gaming App." Front panel Type A ports, as well as headphone and microphone jacks, all connect through industry-standard internal headers.

MSI’s Aegis X layout makes more sense when viewed from the rear, with its Mini ITX motherboard in the case’s upper portion and the power supply located in its lower portion. MSI delivered the Aegis X-001BUS with one of its own graphics cards, some drives, and a CPU: Retail buyers get only the case, power supply, motherboard, CPU cooler, and all the hardware needed to connect everything.

The Aegis X motherboard includes a Killer Wireless-AC 1435 controller in addition to the Killer E2400 Gigabit Ethernet, thereby enabling Killer Doubleshot Pro support. There are no USB 3.1 10 Gbps ports in back, though the two USB 2.0 ports are handy for a keyboard and mouse. Yet even those ports come online too late in the boot process to gain access to firmware. Instead, we had to dig out an old-fashioned PS/2 keyboard to get the motherboard to recognize our striking of the Delete key in a timely manner.

Located in the lower section, a so-called 1U power supply is specified to deliver up to 600W. We’re not lazy enough to call it proprietary, since several manufacturers offer compatible units.

The installation kit includes a power cord, Wi-Fi antennas, software, and a right-angle HDMI patch cord. The patch cord connects your graphics device to an extension cable that runs from the case's rear to front HDMI port. That’s two patch cords (internal and external) in addition to the cable you’re planning to use: Most of us would rather run a single cable around the case to avoid this compromise.

Our customized configuration came with a CEE 7/5 (French) power cable. Retail US buyers should expect a Type B cable and none of the added parts (drives, graphics, etc) seen in previous photos.