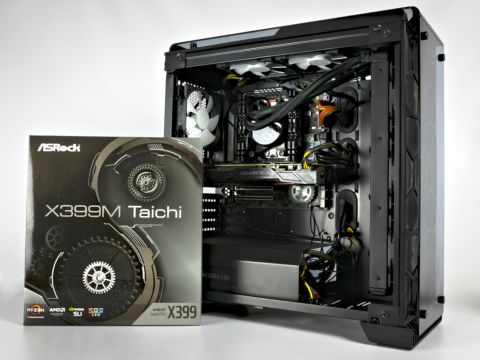 With successful 1950X benchmark results and compelling thermals and power numbers, we have an expectation that the ASRock X399M Taichi can hit similar CPU and memory frequencies to its larger ASRock siblings. We were able to dial in similar settings to our Taichi and Fatal1ty reviews by disabling PROC_HOT, voltage safeguards, lowering the loadline and landing at a VCore regulator setpoint of 1.2625V. We still observe instances of thermal throttling where the multiplier drops to 5.5 to keep VReg and CPU temperatures in check. Regardless, our Prime95 load during our overclocking is extremely stressful for these CPUs, thus keeping us from hitting that precious 4GHz overclock.

Memory frequency was a surprising defeat. We were only able to achieve AIDA64 stability with the DDR4-3066 setting through the UEFI with the 1950X. We typically see memory overclocks improve when slots are removed and brought closer together, translating into better signal integrity to the DIMMs. Another likely cause could be that some of our DIMMs don’t like to be in specific slots, proving that achieving higher clocks can be obtained through patience and perseverance instead of brute force.

Swapping in the 2990WX, we are already thermally limited by the VReg cooling solution, but we charged ahead and pushed the system further. Voltage setpoints are drastically different between the processors, so disabling PROC_HOT, MOSFET protections, and setting VCore to 1.05V led us to an extended Prime95 overclock of only 3225MHz. The above picture shows that 3450MHz can be set in the UEFI, but the VReg temps will go beyond the safe point for MOSFETs, making additional cooling necessary. On the surface, this seems like a defeat, but let’s take a step back.Â Â

Most media outlets are touting 4.0GHz or higher overclocks on their 2990WX samples. Upon further inspection, they are either running larger coolers or lighter workloads. As many outlets are posting Cinebench scores, we will write up a short 10-loop Cinebench multithreaded execution test that gives us several data points. First, we get that impressive “1 run” overclock that most outlets bump chests about. The second data point we gain is repeatability. A one-run overclock is only useful for that one run. As components heat up, voltages fluctuate, and different platform choke points are stressed with successive runs. On a related note, we want a workload that is going to be analogous when we start to engage Precision Boost Overdrive, which we will cover shortly.

Being ambitious, bumping the voltage up to 1.2V and setting the multiplier to 39.25 easily hits 5600 points with Cinebench across all loops and our regulator is averaging out at 74C, or 50C above ambient, which is well below our Prime95 setting. With that thermal headroom, we can bump the voltage up to 1.25V and crank our multiplier to 40.00 to achieve the elusive 4GHz point. Any higher on the frequency and we fail out on repeated loops, though we were able to hit 4.05 with a few successful loops before our system required more voltage for stability. Resulting scores are 5850 at 4GHz and pushing the 5900’s for the less stable frequencies.

If that all flew over your head, there is an easy way to hit 4GHz-like performance, and that is with Precision Boost Overdrive. NOTE: enabling this feature will void the warranty on your precious processor. Throwing risk into the wind, we void ASRock’s warranty and sure enough, setting PBO to AUTO gives us a Cinebench Looper score of ~5400 points for a 6% increase over stock settings. Not bad. Setting PBO to “ENABLE” engages ASRock’s aggressive board settings and our 1 run PBO score is an impressive 6016! However, successive loops prove the point that this system’s power and the thermal solution can’t maintain the load for longer durations. So our 10 loop average decreases to 5666 points. Though we don’t have the graph, it’s important to note that upon each loop, we decreased logarithmically to around 5200 points, which is very similar to our standard 2990WX stock result.

In short, the X399M overclocks as well as its larger brothers and shares the same flaws, mainly its VReg heatsink. In order to push the system harder, you'd need to employ a monoblock, which we'll be doing shortly in a build feature based around this board and the 2990WX. Cooling solution aside, this board can deliver the power required to push either Threadripper CPU well past standard operating conditions, but in doing so we see our Kill-A-Watt break the 800W threshold! Oh, and the 2990WX also hits DDR4-3200 memory speeds.

MORE:Â How To Choose A Motherboard

Prev Page Synthetics, Applications and Gaming Performance Next Page Power, Thermals, Efficiency, Value and Conclusion
Be In the Know