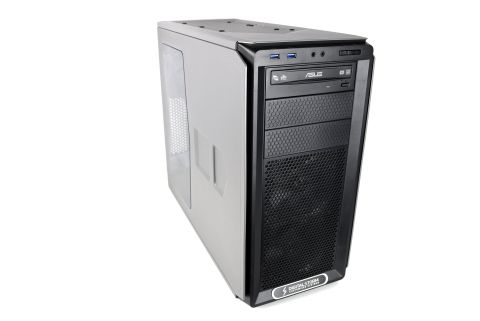 Digital Storm didn't pull any performance punches by pulling down the price of the Vanquish 5 to a reasonable $2,045. That gets you a moderately-overclocked and water-cooled i7-6700K, 16GB of RAM, a GTX 1080, SSD storage, and remote-controlled LED lights in a unique and attractive chassis. The Vanquish 5 easily earns a Tom's Hardware Approved award, but it's a prime candidate to receive higher honors if its value remains unchallenged in our reviews.

Digital Storm is well known for its powerful (and expensive) custom desktop PC builds, but what you may not know is that the company offers modest and affordable configurations, too. Enter the Vanquish 5, a VR-ready gaming desktop featuring an Intel Core i7 processor, 16GB of memory, and an Nvidia GeForce GTX 1080 under the hood, all for an uncharacteristically-low price of $2,045. Does the Vanquish 5 offer enough bang for the buck? We're going to find out.

The Digital Storm Vanquish 5 features a gray Corsair 230T mid-tower ATX case, with only the company emblem and a sticker to identify its origins. The plain chassis is meant to keep the cost down, but it includes a rear 120mm output fan (attached to a radiator and another 120mm output fan) and two 120mm LED front intake fans, which illuminate the front grill with a static blue hue. The top of the case is ventilated and has mounts for 120 and 140mm fans and radiators, but they are unoccupied and simply act as a passive exhaust.

The left side panel sports an angular window that showcases the power supply, graphics card, and CPU cooler. The window is also lit up by an added RGB LED light strip that borders the bottom edge and halfway up the back panel. The strip is remote controlled, and you can create your own mix of colors and alter the effects from the palm of your hand, without software. It gives an otherwise plain case an exciting aesthetic bonus that has “gamer” written all over it.

The side panels are easy to remove, with a single thumb screw holding them in. However, they don’t detach like a traditional case, and you have to slide the panel towards the front of the chassis to remove it (most case panels slide toward the rear).

The motherboard I/O isn’t as robust as other feature-rich motherboards, with only two USB 3.0 and two USB 2.0 ports on the rear panel. However, there is a USB 3.1 Type-C port with up to 10 Gb/s data rates, in addition to a PS/2 port for old-school keyboards and mice. The rear audio jacks (six) are powered by a Crystal Sound 2 chip, and the motherboard also sports a DVI-D port and an HDMI 1.4 interface. The front panel I/O (located above the Asus DVD-RW optical drive) consists of two USB 3.0 ports, mic-in and headphone out jacks, and the power and reset buttons.

Most graphics cards feature three DisplayPorts and one HDMI output, but the Asus GTX 1080 Turbo inside the Vanquish 5 sports two DisplayPort 1.4 interfaces and two HDMI 2.0 ports, in addition to a DVI-D port. The extra HDMI interface makes it easier for VR gamers to connect their HMD without the need for an adapter. However, depending on your choice of headset and how many peripherals you need to plug in, you may find the limited USB connectivity difficult to overcome.

The Vanquish 5 houses an Intel Core i7-6700K quad-core processor overclocked to 4.4GHz on all four cores, which is rather safe for a company notorious for insanely-overclocked custom systems. However, the non-aggressive CPU clock rate should provide a modest performance boost and adequate stability.

The CPU is seated on an Asus Z170-E ATX motherboard, which has a limited feature set, but it’s an ideal entry-level board for a Z170 chipset. It even supports two-way AMD CrossFire and Nvidia SLI, but the third PCIe x16 slot only has two lanes running to it, which cuts it off from three-way Crossfire compatibility and would slice the bandwidth of a PCIe 3.0 x4 SSD in half. It’s probably better to fill that slot with a wireless Ethernet or capture card, rather than PCIe storage. However, the M.2 slot supports PCIe 3.0 x4 SSDs, so you could still upgrade to a next-gen storage device at full bandwidth, if you’re so inclined.

Digital Storm equipped the Vanquish 5 with a 250GB Samsung 850 EVO SATA 6Gb/s SSD, in addition to a 2TB 7,200 RPM Toshiba HDD. With three of the SATA ports already occupied (remember the optical drive) that leaves you with just three more SATA ports (two of which make a SATA Express interface) to expand your storage. However, the configured storage setup offers ample SSD capacity for your operating system and primary productivity apps.

The company-branded 16GB (2 x 8GB) DDR4-2666 modules (which are really just ADATA modules) feature a CAS latency of 16-16-16-39, which should provide exceptional stability with the less aggressive timings. The graphics card is an Asus GTX 1080 Turbo, which features the same clock frequencies (1607MHz base, 1733MHz boost) as the Nvidia Founder’s Edition GPU, but it sports a plastic shroud instead of a beefy vapor chamber. The lone dual ball bearing fan exhausts heat out the back of the machine, and an LED-lit Asus logo highlights an otherwise plain graphics card. Digital Storm didn’t overclock the GPU in our review sample, but you can add $45 to the tab if you want some extra GPU performance, if you aren’t the tinkering type.

The aforementioned 120mm front LED fans blow air directly over the 3.5" and 2.5" drive bays with a clear shot to the GPU, and two 120mm Corsair fans attached to a Digital Storm Vortex 120mm radiator in a “push/pull” configuration exhaust heat out of the rear of the case. The cooler resembles a Corsair H55 with its circular copper block, mounting brackets, and thinner non-braided black tubing.

The Vanquish 5 is powered by a semi-modular EVGA Supernova NEX 750B PSU. It's 80 Plus Bronze certified and features four 12V rails, each offering 20A of juice. Only a few ports on the PSU are used, but Digital Storm gives you the extra cables (along with all the other components' accessories and manuals) if you need to power some more internal devices.

The cable management isn't anything to write home about, but to be fair, the Corsair 230T doesn't offer many places to hide them. The main interior's exposed cables are neatly zip-tied, and it's about as clean as you can run them, given the chassis. However, they are banded together rather tightly, and it could prove difficult to reroute any of the existing cable work if you wanted to make some changes under the hood. Removing the right side panel shows us where all the excess cable went, with a wad of wires doing the best it can to remain inconspicuous. However, upon closer inspection, we can't say we could have done much better considering the cable management limitations of the case.