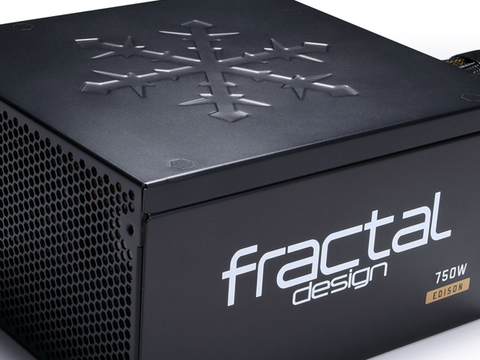 The Edison M Series 750 W PSU is a solid performer, with quality components; a good FDB fan; and a long, five-year warranty. However, the fan can be noisy under tough conditions, and at this price, there are many PSU choices with equal performance and efficiency levels.

Up until now, Fractal Design cooperated with ATNG for its higher-end PSU offerings. Although ATNG is a lesser-known original equipment manufacturer (OEM), it has a reputation for making high-quality products. The latest PSU line from Fractal Design, called Edison M, or simply Edison, is made by Seasonic, a prolific OEM with lots of experience in this field. Seasonic is responsible for some of the best PSUs money can buy today. The Edison series consists of four units with capacities ranging from 450 to 750W, covering mainstream and mid-level outputs.

All Edison units use a semi-modular cabling design and meet the 80 PLUS Gold requirements, since they are based on the same platform as Seasonic's G-series PSUs. This is an affordable mid-range platform designed to satisfy users who aren't after top performance, but want a product with a high performance-per-dollar ratio.

Today we're evaluating the most powerful member of the Edison family, which delivers up to 750W. That's enough to cover the needs of two high-end graphics cards along with the system components to support them. Because the Edison units are based on a platform proven to be reliable, Fractal Design backs them up with a five-year warranty.  Seasonic is known to use good-quality capacitors and fans in its implementations, so providing a long-term warranty doesn't involve a high risk. In a typical PSU, there are two things that are most likely to go wrong: the electrolytic caps used in the APFC converter stage and in the secondary side, and the cooling fan. The fan can be fatal for the PSU's longevity, especially if it doesn't have Over-Temperature Protection (OTP). Before it completely stops working, you might notice weird sounds or simply more noise. Ball-bearing fans especially get louder as their bearings start to fail, which is a good indication that a replacement is needed. On the other hand, the plain sleeve-bearing fans might not provide enough clues before they break down; besides that, they have a significantly shorter lifetime compared with ball-bearing fans.

The efficiency of this PSU is Gold-rated and the cabling design is semi-modular. We would prefer fully modular cabling, but obviously this would increase the unit's cost. According to Seasonic, the platform can deliver full power continuously at 40 degrees Celsius; at 50 °C it can deliver 80 percent of the max-rated load. We expected that there would be no limitation with 50 °C in power delivery, since the same platform used in the Seasonic G units delivers full power at 50 °C effortlessly. We'll have to take a thorough look at this unit's internals to find out why the full power was lowered.

The PSU’s cooling fan uses a Fluid Dynamic Bearing (FDB), which is an upgraded sleeve-bearing type offering a much longer lifetime along with silent operation. Currently, FDB fans are considered the best since they match (and in many cases exceed) the lifetime of ball-bearing fans. They also don't have the typical problems seen in ball-bearing fans, including increased noise once their bearings start to wear out. The fan-control circuit doesn't include a semi-passive mode like Seasonic's high-end PSUs; however, as long as it keeps the fan at low speeds under light loads, we don't believe that this is a downside. On the contrary, we aren't big fans of semi-passive operation since it allows for increased heat build-up at the internals, applying unnecessary stress to sensitive components like electrolytic caps. Finally, the PSU is compatible with the newer ATX v.2.4 guideline, which automatically means that it is Haswell-ready.

The minor rails on the Edison M PSU are restricted to 100W, which is enough for every modern system that can be supported by a PSU with up to 750W. The single +12V rail, on the other hand, is pretty powerful with 62A max current output. Finally, the 5VSB rail has the typical capacity for a mid-range PSU.

You can have either four PCIe connectors with a pair of EPS connectors, or a single EPS plug with six PCIe connectors. Given this unit's capacity, we believe that this is a fair compromise, since six PCIe and two EPS connectors can easily draw more than 750W if they are attached to power-hungry components. The quantity of the other connectors is pretty high for the capacity of this PSU.

All of the cables are long enough, with the EPS ones reaching 70 centimeters, so even in full tower cases there won’t be any problems. In addition, the distance between the SATA connectors is adequate. However, a longer run between the peripheral (four-pin) connectors would be preferable. Fractal Design also includes an FDD adapter, which can come in handy in some rare cases. Finally, all cables use standard 18AWG wires.

Since this PSU features a single +12V rail, we do not have a comment about its power distribution.

Next Page Packaging, Contents, Exterior And Cabling
12 Comments Comment from the forums
Be In the Know