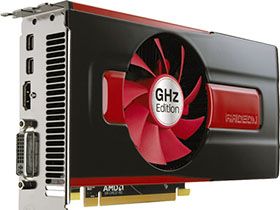 Clearly, the company feels that the first-generation GCN graphics cards still have a lot to offer, especially with a handful of clock rate tweaks. We wouldn't necessarily disagree; the Radeon line-up offers a viable spectrum of performance, from the entry-level Radeon R7 240 to the flagship Radeon R9 290X.

We'd obviously prefer to be testing genuinely new hardware, rather than re-badged versions of old models. With that said, there seems to be a formula for making already-seen graphics cards more successful: increase performance and reduce price. We saw this from Nvidia's GeForce GTX 770 which, at launch, was essentially a highly overclocked GeForce GTX 680 with a $50 price cut. Even more impressive was AMD's Radeon R9 280X, which surfaced looking a lot like an overclocked Radeon HD 7970 at its core, yet came to market $150 cheaper than the product it replaced. Of course, the R9 280X jumped to $470 shortly thereafter, while the GTX 770 fell to $320, but that's another story...

With all of that in mind, when AMD told us that it was re-badging the Radeon HD 7770 as a "new" Radeon R7 250X, we were really hoping the company would increase clock rates and drop the price so we could get excited about it. Disappointingly, the frequencies aren't changing, though AMD claims pricing should fall to $100 (as of this writing, there is no online availability to confirm).

A $100 mark sounds really nice compared to the Radeon HD 7770's $160 when it launched. But it looks a lot less impressive after a look on Newegg. The 7770 has shown up for as little as $100, although the current average lands around $110. If the the R7 250X can keep that figure down at $100, we'll certainly take the discount. Though, again, it's not something we're going to get excited about.

To be frank, if I didn't think that the Radeon HD 7770 was such an important mainstream graphics card in the first place, I would have probably posted a small news item about the name change and continued on with my work. But in my opinion, the HD 7770 (and now R7 250X) is the most important budget-oriented graphics card available. At $110, it's the cheapest option that lets you play most games comfortably at 1920x1080 with low to medium detail settings.

If you're interested in the technical aspects and features of AMD's Cape Verde GPU, check out AMD Radeon HD 7770 And 7750 Review: Familiar Speed, Less Power. Today's story focuses on gaming performance and value calculations. So, let's get on with the benchmarks.