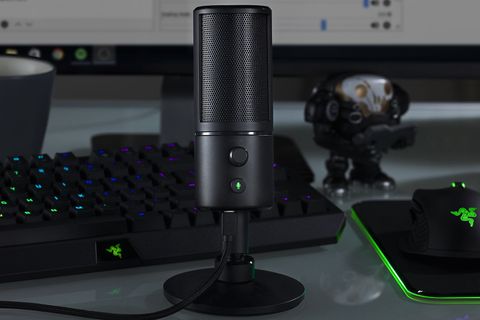 For streamers who need a portable and / or space-saving setup, the Seiren X is a good fit, offering crystal-clear vocals. But despite its "supercardioid" polar pattern, it does pick up keyboard and mouse clicks.

The gear gods have been advocating it for years, and pro streamers couldn't do their job without it. But going with a dedicated desktop mic for gaming is still a bold move in 2019 despite its obvious benefits: higher broadcast quality than headset mics, a broader choice of headphones, and a 'pro streamer' aesthetic that a certain audience is willing to pay a premium for. The Seiren X mic from Razer aims to hit that audience while also addressing the chief stumbling block for those still using headset mics: price.

Available for £99.99/$99.99, the Seiren X is one of the best gaming microphones and a lower-budget offering than Razer's full-blooded Seiren Elite dynamic desktop mic, which sells for just under £200/$200, and the HyperX Quadcast, available for just under £150/$150. The idea here is that the X variant strips away some frills while delivering a recording and broadcast quality broadly equivalent to pricier competitors. Available in that classic black (with obligatory Razer green accents), a blue and black scheme for the PS4 edition and an additional quartz-pink model, the Seiren X offers a decent range of aesthetic options for a microphone. And fits nicely within the company's streamer-focused range of broadcasting equipment which now includes capture cards, lighting and cameras.

If you're so inclined, you could go all-in for an entire streaming setup carrying Razer branding. We're not advocating that, but as a moderately priced step toward a better-sounding game stream, the Seiren X isn't a good option.

Like the majority of gaming-focused broadcast mics on the market, this model sports an electret condenser with a wide diaphragm and substantial shock protection, anchored by a nice heavy stand. Volume and mute controls live on the mic itself, while the cables run down through the stand, which is a slightly awkward arrangement in the name of neatness. That tiny issue aside, it's a handsome looking piece of kit that doesn't go too hard on the 'gamer' look and is all the better for it. We really like the simplicity of the aesthetics, and if you're worried about its appearance not popping out on your streams as you'd like, the pink option is bound to get noticed.

It's a strikingly small microphone, this one, coming in at around half the dimensions of its big brother, the Seiren Elite, and dwarfed by the HyperX Quadcast and the Blue Yeti, which is still the go-to USB mic company for many gamers. The size is handy for those pushed for space on their desktops, and it's unlikely to impinge on your beautiful face on camera.

However, microphones with larger capsules hold the advantage of being able to protect the delicate diaphragm more effectively with a larger shock protector. There's also the issue of the diaphragm size itself--some say larger diaphragm condensers convey a richer sound quality when recording vocals while generally keeping self-noise to a minimum, while others prefer the natural articulation and agility of smaller diaphragm condensers. Since the Seiren X is a completely different mic than the dynamic Seiren Elite, this isn't just a matter of shrinking the diaphragm down however. The upshot for the end user is more likely to be increased pickup of unwanted desk noises like knocks and scratches.

With all that said then, the ideal application for the Seiren X is on-the-go streamers. If you need a streaming setup you can fit into a suitcase and set up on the go, this mic is a sensible choice for you.

There's just one polar pattern available here, and it's supercardioid. Essentially, this is a tighter pickup area than the traditional cardioid, the idea being that the Seiren X picks up only what you want it to--in most instances, your voice, while falling deaf to unwanted background noises like ambient room noise, keyboard and mouse clicks, or trains rolling by on the railroad outside your window that you didn't notice when you first looked around your apartment. That's the theory, anyway. In truth, to our ears it sounds as through the Seiren X picks up just about as much mechanical keyboard clatter as HyperX's Quadcast using the cardioid polar pattern. Considering this is your sole choice of polar pattern, that tendency to pick up high frequency noise is a bit limiting.

It's a shame not to have a couple more options here for podcasting or group streaming, too. Our only bugbear with gaming mics across the board is that they're limited in usage, often for no good reason. USB interfaces are convenient but they mean you can't run a gaming mic into an audio interface, which limits their home recording potential.

However, when recording a vocal in isolation, the Seiren X performs really well. It's able to pick up the little details in the higher frequencies, and produces a "breathy" quality that we really like. Low end does lack a bit of authority, but it's there enough to cut through a mix and when you run a compressor over the vocal recording, there's real punch and clarity to it.

Truth be told, it's not quite as warm or full in tone as the Quadcast or the Blue Yeti, but considering the price difference between the Seiren X and those pricier mics, that tradeoff feels reasonable. It does reinforce that this is a mic with a specific usage scenario though, for on-the-go streamers who'll be happy to compromise outright sound quality for easy transport and quick setups and packdowns.

The Seiren X is also a little more prone to picking up those knocks and bumps on the desk and the mic itself during recording, which means you have to take greater care when the proverbial red light's on than when using other mics. Likely that's again down to its small size.

This is a no-frills, no fuss package from Razer, although as always, the packaging itself that the Seiren X arrives in is luxurious and owes much to Apple's decadent product presentation. Open up a Razer product box, read the proclamation welcoming you to "The Cult of Razer" and try to tell us otherwise. But in terms of added extras, there's little here. You'll find the mic and stand in there, the cable, and a setup guide. It's possible to fit the mic to a shock mount and boom arm, but you'll need to buy the mount separately. We'd advise doing this, despite the additional outlay. It'll minimize any audible pickup of those bumps and bangs that are bound to happen from time to time while you're streaming, and by placing the mic in an elevated position you're moving it further away from that noisy keyboard and mouse. We'd have liked to see an adapter included for using a boom arm. HyperX throws one in with its Quadcast, but that mic costs about 50% more.

We're of two minds about the Seiren X. On one hand, it offers a sensible and very usable compromise between full-size, full-price gaming mics both within and outside the Razer fold, delivering great clarity and fundamentally clear and bright recording quality while minimizing setup fuss. However, since gaming mics are themselves a bit of a compromise versus XLR studio mics, this is a compromise of a compromise. It's not that the product itself fails to deliver on any of its specs or intended purposes, but rather that these are quite narrow in the first place.

Even if you are a streamer looking for an easy and portable setup, it's definitely worth considering spending a bit more money on an audio interface and a studio mic. Doing so opens up many more possibilities to you, and although your viewers probably won't notice the difference over Twitch or YouTube's compression-happy platforms, it'll also open up better recording quality.

Ultimately it would be unfair to penalize one well-made and high-performing product for our wider grievances with the market. So now that we've said our piece about microphones in general, let's say this: for £100/$100, here's a mic which vastly better sound quality than any headset mic will offer, and it's smaller than a can of soda. There's not much to complain about there, is there?