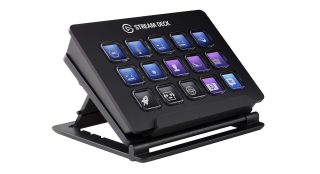 Unfortunately, this smoking deal is sold out, but head to our Cyber Monday Tech deals page for more deals.

Here’s a Black Friday deal for everyone’s favorite, highly-wanted but not-quite-necessary desk accessory: the Elgato Stream Deck. Normally it retails for about $149, but Amazon’s thrown it on a Black Friday deal down to $99.99. Be quick though, because the deal will expire in less than a day -- or whenever inventory runs out.

Elgato’s Stream Deck is essentially a glorified Macro board, though calling it that is a disservice. Rather than coming with 15 simple macro buttons, it comes with 15 buttons, each having a little LCD screen below it that can display whatever you need it to.

Elgato Stream Deck: Was $149.99, Now $99.99
Elgato's Stream Deck is one of the most-wanted accessories for streamers, but it's also just very nice to chuck on your desk and use to launch programs and games. This deal is for today only.
View Deal

All the buttons are customizable, and the unit is built to integrate into Twitch, Twitter, YouTube, and a whole host of other streaming and media platforms. Each ‘Macro’ can also be customized very extensively, making one key-press start a string of actions across multiple programs to streamline your workflow.

Most of us don't strictly need the Elgato Stream Deck, but it sure is nice to have and makes your desk look more interesting.