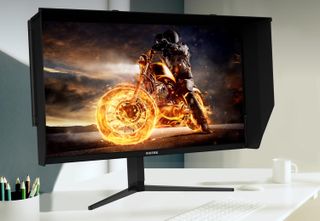 High refresh rate gaming at 144 Hz is the dream. So is gaming at 4K, but the two don't really play well together with today's tech. The connectivity to make it happen isn't here yet, not to mention the sheer amount of graphical horsepower you'll need. In spite of this, Viotek released its GFI27QXA, which is a 27-inch 4K gaming monitor with a 4K refresh rate, competing for a place among our best 4K gaming monitors.

And the fun doesn't end there. It's not like this is a cheap TN panel that happens to do 4K and 144 Hz -- it's an IPS panel, which means colors and viewing angles will be pretty good too. it doesn't come with a curve, but you don't need this at 27-inches either. sRGB color gamut is rated at 110%, and the display is capable of a standard 16.7-million colors.

But like I said, the connectivity isn't here yet. Viotek is using a creative workaround -- using two cables. To run 4K at 144 Hz, you'll need to use both DisplayPort 1.4 ports on the monitor to get the bandwidth to push all those pixels -- a single cable will limit you to 120 Hz.

So essentially, that means you'll be setting the display up as two separate units as far as your PC is concerned, but without a bezel in between, you shouldn't notice a difference. You'll have to get technical to set it up correctly, and it might not play nice with all games, but it'll be something special when it works for sure.

G-Sync and Freesync are also supported with a range of 48 to 144 Hz, which will help make gameplay smooth and stutter-free.

Topping it off, the Viotek GFI27QXA also comes with a stand that supports plenty of adjustments and a glare shield.

Pricing isn't bad either. $750 is still a lot of money, but with this being one of the very few 4K, 144Hz IPS gaming monitors, it's really not that bad. You can purchase it now on Amazon.