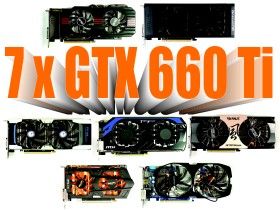 Even though Nvidia's GeForce GTX 660 Ti hasn’t been around for long, there are almost as many third-party board designs as the much more mature GeForce GTX 670. Of course, this isn't particularly surprising; there is no real GTX 660 Ti reference design, compelling vendors to create their own product.

We covered the card's technical specifications in GeForce GTX 660 Ti Review: Nvidia's Trickle-Down Keplernomics. So, today, we're focusing on those retail cards with aftermarket tweaks and optimizations. We have a total of seven submissions from Asus, Gainward, Gigabyte, Galaxy, MSI, Palit, and Zotac. EVGA wasn’t able to send us a sample this time around, and we never heard back from Point of View (which is fine, since they don't sell in the U.S. anyway).

When we finished up with our benchmarks, we discovered that different tests led us to divergent conclusions about the cards we tested. The game and settings you use can have a huge impact on the performance of Nvidia's GeForce GTX 660 Ti. This was perhaps most evident in our launch story, which many of you pointed out didn't always jive with some of the other reviews out there. And yet, we picked the settings for each test we ran based on what the GeForce GTX 660 Ti could handle, yielding both playable performance and optimal graphics quality. That's what any gamer is going to do.

So, what caused the discrepancy? We're including an in-depth memory bandwidth analysis, which should really spell out why our results came out the way they did, and why we think they're right on the money. We're also taking a good look at the usable GPU Boost clock rates for these cards. After all, you never know what you’ll find when you dig deep enough!

As you already know, Nvidia's GeForce GTX 660 Ti uses the same GK104 silicon as its GeForce GTX 670. The new card's memory interface is cut back from 256 to 192 bits, though. Also, one of its four render back-end clusters is disabled. The GPUs are otherwise completely identical, including seven SMX blocks with a total of 1344 CUDA cores and 112 texture units.

Each of the remaining ROP clusters can output up to eight 32-bit pixels, for a total of 24 pixels per clock. The three 64-bit memory interfaces provide the aggregate 192-bit pathway. And coincidentally, the GPU and memory clock rates are the same as GeForce GTX 670. Then again, that fact doesn't really apply to today's story; six of the seven cards are overclocked right from the factory.

Let’s first have a look at the seven cards’ technical specifications.

On paper, Gigabyte and Zotac appear to have the most attractive boards, the former offering overclocked specifications right at Nvidia's MSRP, and the latter juicing memory performance, which we suspect will play a big role in alleviating bandwidth limitations, for just $10 more.

Two of the cards, from Gainward and Palit, aren't available to our U.S. audience right now. So, we don't have prices listed for them.