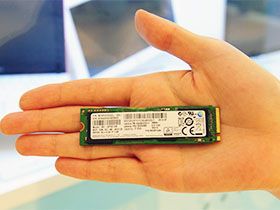 The difference in sequential write performance between the three SM951s is significant. That wave in the 512GB model's output could be due to thermal throttling. We ran the test several times and came away with the same pattern. The SM951's controller runs cooler than the XP941's. As a major manufacturer, Lenovo could have asked Samsung to build a drive with a lower TDP for its Ultrabooks.