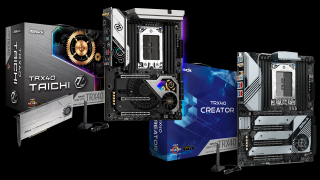 The TRX40 Creator features three onboard M.2 slots, while the TRX40 Taichi only has two. But the Taichi version also includes a PCIe x16 to 4-drive M.2 adapter card.

Both boards include 20 Gbps USB3 2x2 (Type-C) connectors and Intel Wi-Fi 6 adapters, but while the Creator’s dual-Ethernet connections include one 10GbE, the Taichi’s fast networking is only 2.5GbE. Both motherboards have 90A Dr.Mos power stages. However, the Taichi is rated at 16-phases, and the Creator is only rated at eight.

Pricing has not yet been announced, and availability will coincide with the Ryzen Threadripper 3000-series launch on November 25.