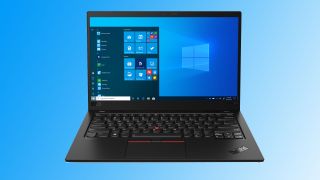 Why mess with success? That's what Lenovo must be thinking as today it announced the ThinkPad X1 Carbon Gen 8 and X1 Yoga Gen 5, both of which have nearly-identical specs and the same chassis as their immediate predecessors. Due out later this year for starting prices of $1,499 and $1,599 respectively, the new Carbons offer a couple of new configuration options, improved Wi-Fi and a slight keyboard labeling change.

We normally expect that, when a company releases a new version of a laptop that it will either have a newer CPU, a noticeable design change or, most likely, both. But the ThinkPad X1 Carbon Gen 8 and X1 Yoga Gen 5 will have the same 10th Gen Intel "Comet Lake" CPUs as the current models on offer right now; it is just adding versions of those chips with vPro remote management built-in.

There are two improvements in the X1 Carbon that aren't optional and should be noticeable. Both models now come with Wi-Fi 6, aka 802.11ax, while their predecessors had only Wi-Fi 5 / 802.11ac. The other change is that their keyboards now have conferencing (call / hangup / messaging) icons on the F9, F10 and F11 keys and those keys will work within apps like Skype.

Whether these modest improvements justify a version number increase is up for debate. Remember that Lenovo added Comet Lake CPU options to the Gen 7 ThinkPad this past fall without changing the generation name. However, considering that it's a new year and the company typically announces new ThinkPads at this time, it only makes sense to brand this as a relaunch.

New model number or old, the ThinkPad X1 Carbon remains one of the best productivity laptops around. Its combination of extremely light weight, long battery life, excellent keyboard and TrackPoint navigation make it an incredible productivity tool. We loved the X1 Carbon Gen 7 when we reviewed it in September 2019 and we expect identical or nearly-identical performance from Gen 8.

From a shopper's perspective, however, Lenovo has made it pretty easy for consumers to buy the current, Gen 7 model without feeling like there's something significantly better coming around the corner. Given Intel's problems with producing an adequate supply of 10 nm chips, it seems likely that we won't see an X1 Carbon or X1 Yoga with new Intel CPUs for a long time.